Some unknown gunmen have shot dead an aide to the Governor of Benue state, Samuel Ortom. 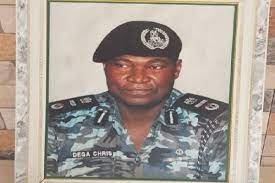 Dega
An aide to Governor Samuel Ortom of Benue state has been killed by unknown gunmen.
AIG Christopher Dega (Rtd) before his death was a Senior Special Assistant to Benue Governor Samuel Ortom on Security.
Jega was said to have been shot in the chest several times by the gunmen on Tuesday, June 1 in Jos.
AIG Dega had a brilliant career in the Nigerian Police Force and was twice Commissioner of Police in Borno and Edo States.
He hailed from Katsina-Ala local government area in Benue state .
More details later.
Top Stories