Meanwhile, there are fears that Sharibu, who reportedly had her second child in Boko Haram’s den after she was forcefully married to a Boko Haram commander loyal to Shekau, may now be held by the ISWAP insurgents. 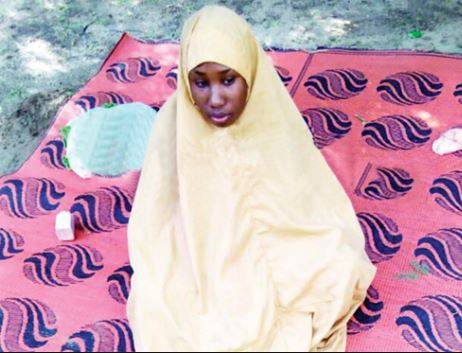 Sources have revealed that the remaining over 100 Chibok schoolgirls as well as Dapchi school captive, Leah Sharibu, and other kidnap victims are feared to have been transferred to the Islamic State West African Province Fighters who overran the camp of Boko Haram factional leader, Abubakar Shekau, before killing him weeks ago.

Military sources told SaharaReporters that intelligence showed the 112 Chibok girls were no longer in the custody of the Boko Haram terrorists and were feared to have been captured by the deadlier ISWAP faction, which is more into forced indoctrination.

Meanwhile, there are fears that Sharibu, who reportedly had her second child in Boko Haram’s den after she was forcefully married to a Boko Haram commander loyal to Shekau, may now be held by the ISWAP insurgents.

One of the sources said the overwhelmed military forces are “fighting hard to prevent incursion of terrorists into the Nigerian territory through Borno State and negotiations for the release or rescue of the captives are solely with the Federal Government".

"Honestly, we don’t have enough military intelligence and action for that. What is our priority is to secure our territories first,” the source said.

“What this means is that the government may be forced to start negotiating with ISWAP too to secure Chibok schoolgirls and possibly Sharibu. The ISWAP is a more radical brand of religion and there are fears that they may not be politically penetrable such as the Boko Haram,” another intelligence officer said.

SaharaReporters had on May 20 reported that Shekau killed himself during a violent clash between his faction and the ISWAP fighters who overran the Sambisa Forest in Borno State.

Multiple military sources had confirmed to SaharaReporters that Shekau blew up himself with an explosive when it was clear that the ISWAP fighters wanted him to relinquish power to them, after all his commanders were captured and killed in the forest.

ISWAP, which had broken away from the Shekau-led Boko Haram faction in 2016 after pledging allegiance to the Islamic State, had reportedly raided the group’s hideout using no fewer than 50 gun trucks.

Shekau had been the leader of Boko Haram since 2009 following the death of the group’s founder, Mohammed Yusuf. He had been rumoured to have been killed by the Nigerian military at least four times between July 2009 and August 2015.

The Chibok community under the Kibaku Area Development Association (KADA) had only in April lamented that 112 Chibok schoolgirls were still with the Boko Haram terrorists, noting that their rescue is no longer a priority for the President Muhammadu Buhari government.

The Chibok community had said Buhari should be reminded that he made a promise during his inauguration in May 2015 that “We cannot claim to have defeated Boko Haram without rescuing the Chibok girls and all other innocent persons held hostage by insurgents.”

Also on April 19, seven years after they were abducted, the BringBackOurGirls movement released the names of 112 Chibok schoolgirls who are still held in the custody of Boko Haram insurgents.

The Boko Haram insurgents had invaded the Government Girls Secondary School in Chibok area of Borno State on April 14, 2014, and abducted 276 schoolgirls preparing for their final-year examination.

Among them, 164 have either escaped, been released or rescued. Ever since the abduction of these girls, the Bring Back Our Girls movement has been at the forefront of the campaign.