According to the statement, the drugs, suspected to be transported to insurgents’ camps in Borno State, were recovered from a 25-year-old Mohammed Isah on Tuesday. 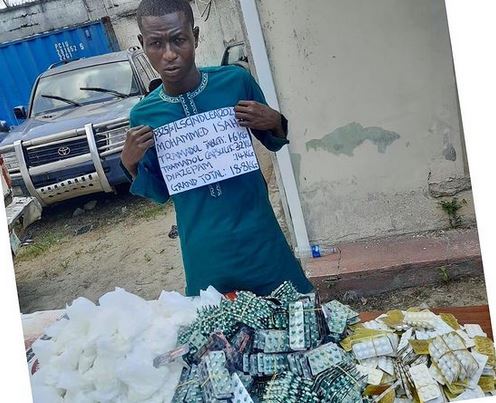 According to The PUNCH, the operatives of the National Drug Law Enforcement Agency have intercepted a total of 34,950 tramadol and diazepam capsules weighing 18.8kg in Lagos.

The NDLEA made this known on Saturday in a statement titled ‘NDLEA seizes 34,950 tramadol, diazepam capsules going to Borno in Lagos’, signed by its Director of Media and Advocacy, Femi Babafemi.

According to the statement, the drugs, suspected to be transported to insurgents’ camps in Borno State, were recovered from a 25-year-old Mohammed Isah on Tuesday.

Isah was arrested at SD Motors park in Agege, Lagos with “12, 390 capsules of Tramadol weighing 4.8kg and 22,560 tablets of Diazepam with a total weight of 14kg, bringing the total weight of the exhibits to 18.8kg.”

During interrogation, the suspect confessed that one Kakali Abubakar invited him on Friday, May 28, to Lagos and offered him N50,000 to transport the drugs to Maiduguri.

“Investigations revealed that before Mohammed’s arrest, Kakali had travelled out of Lagos to Maiduguri to await the arrival of the consignment,” the statement read.

Reacting to the arrest, the Chairman of NDLEA, Brigadier General Buba Marwa (retd.) commended the officers and men of the Lagos state Command of the Agency for their vigilance in intercepting such volume of drugs from getting to Borno.

He also urged them to remain proactive and committed to the Agency’s common goal.