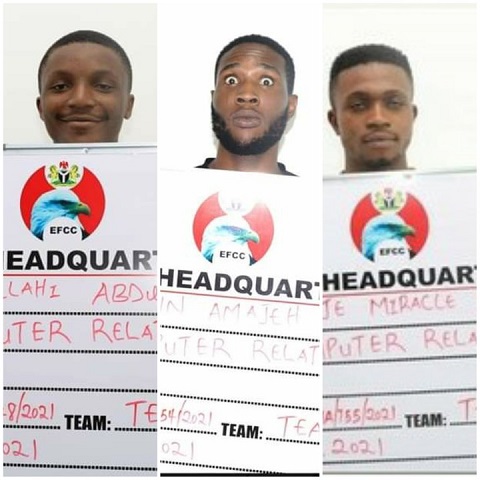 Yahoo boys
Nine suspected yahoo boys have been apprehended by men of the Economic and Financial Crimes Commission.
The alleged Internet fraudsters were arrested at Gwagwalada New Layout area of Abuja, FCT.
The suspects are: Teddy Agbam, Abdullahi Abdulsamad, Abdullahi Abdulrasheed, Ehije Miracle Julious, John Amajeh Stephen, Okorie Kalu Udo, Abrebor Promise, Abdulazeez Amin and Habib Abdulateef.
The arrest followed credible intelligence on the nefarious activities of the suspects.
Items recovered from them are laptops and mobile phones. They were also found with substances suspected to be Indian hemp and other drugs.
They will be charged to court as soon as investigation is concluded.
Top Stories