He said the girl came to Apomu in Isokan local government area of Osun state from Ibadan to visit on the run boyfriend on Thursday. 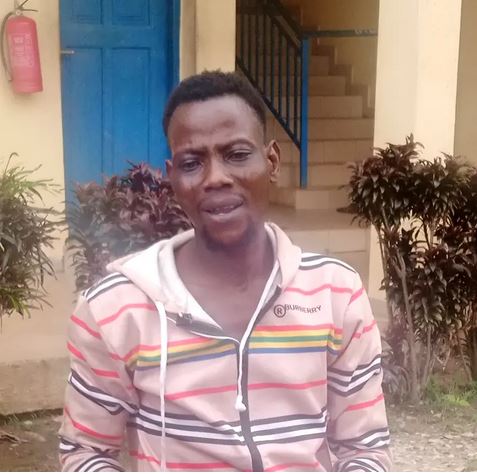 Kabiru Oyeduntan, a 39-year-old suspected ritualist, on Friday narrated how he assisted his friend, identified as Akin (alias o’clumsy) to butcher his girlfriend, according to Vanguard.

He said the girl came to Apomu in Isokan local government area of Osun state from Ibadan to visit on the run boyfriend on Thursday.

The suspect, who was paraded along with the butchered body at the Osun state police command headquarters in Osogbo, said he was promised parts of the body by his friend for money ritual which he rejected.

According to Oyeduntan, who claimed to be a bricklayer and night guard, Akin had preinformed him of his intention to use the girl’s head and heart for money ritual.

“I am a native of Ikoyi but reside in Apomu, my mother’s town. The girl is Akin’s girlfriend and she came visiting from Ibadan on Thursday. I offered them my room, where they both had a nice time.

“Prior to Thursday, Akin had told me he wanted to use the girl’s head and heart for money ritual. So when he was through, I went back into the room and met him trying to strangulate her and I joined him.

“Having killed her, we begin to dismember her body, starting from the head, hands and legs. We went out to relax and buy marijuana to cool down at market square before I was caught by the coordinator of bricklayers association on my community.

“I believed my neighbours suspected foul play while we were mutilating her body and reported to by coordinator, who in turned alerted some members of the community and I was trailed to the market square where I was arrested

This is my first time of killing someone but I think Akin has been in the business for a long time because he was confident that we can kill the girl without being detected”, he said.

He disclosed further that he did not know how Akin disappeared but wished that he is also arrested and brought to justice, adding that his (suspect) action does not deserved being forgiven.

While addressing newsmen, the Commissioner of Police, Olawale Olokode said the suspect was apprehended following tip off from credible sources.

He added that effort is on top gear to apprehend the deceased’s boyfriend while investigation has been opened to ascertain if other people were involved in the act.