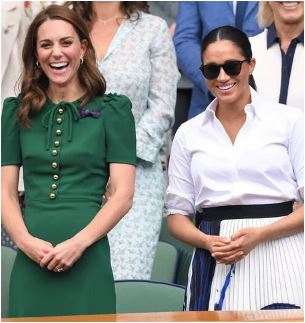 Kate and Markle
A recent poll has named Meghan Markle as the most respected royal in the UK.
The new study placed Markle ahead of Kate Middleton.
The new poll conducted by youth health charity stem4 analysed the interest in a number of celebrities and public figures, including musicians, online creators, sports people and public figures.
Data on members of the Royal Family was collected to show who was deemed the most respected.
Meghan garnered 21% of the vote, making her far more popular with the 1,032 people polled than Kate Middleton, who garnered just 11%.
The study surveyed 1032 people between the ages of 13 and 25.
Meghan was praised for her "bravery and resilience" and for carrying on "even when things go wrong".
Prince Harry and Prince William also made the list with 21 percent and 11 percent respectively.
Those who took part in the study also named other celebrities who they look up to.
Marcus Rashford, Lewis Hamilton and Raheem Sterling were the most admired sports people.
David Attenborough, Captain Tom Moore and Greta Thunberg were deemed the most inspiring people.
Founder and CEO at stem4 Dr Nihara Krause said: "To earn the respect of young people today you don’t need to earn a fortune or have good looks.
"It’s far more important that you show bravery, resilience, and compassion for others and for nature.
"Those are certainly qualities the Queen shares with some of the other names on this list such as David Attenborough and Marcus Rashford.
"It’s also significant that many of the most admired famous people are those, like Billie Eilish and Prince Harry, who have been open about their own mental health challenges."
Top Stories