A former presidential aide and member of the All Progressives Congress has been suspended by the party. 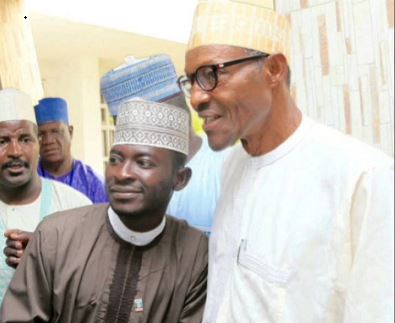 Sharada and President Buhari
Sha’aban Sharada, an ex-Media Assistant (Broadcast Media), to President Muhammadu Buhari has been suspended by the All Progressives Congress.
Sharada is currently a member of the House of Representatives.
Sharada Ward in Kano Municipal Local Government Area suspended Sharada over alleged anti-party activities.
Sharada, who is also the Chairman, House of Representatives Committee on National Security and Intelligence, was also accused of highhandedness.
This was contained in a Press Statement signed by the APC Ward Chairman, Alhaji Abdullahi Sharada, in Kano, on Wednesday.
According to the statement, the federal lawmaker was banned from all party affairs for one year.
The ward chairman explained that the suspension was sequel to a series of complaints about the lawmaker’s anti-party activities from party members across the state.
He said, “The party executives took the final decision of suspending Sha’aban Sharada, from the APC for the period of twelve months, that he will not interfere with all its affairs and activities at all levels.”
Recall that the suspended lawmaker has had running battles with the Kano State Governor, Abdullahi Ganduje and leading APC members in the state.
Top Stories