Touched Twitter users have empowered a Nigerian woman whose children fed on grass due to hunger.

Sadiya and her children empowered by Twitter users
Due to the poverty in Nigeria, a woman whose children were forced to feed on raw leaves like animals has finally gotten help from Twitter users.
According to Sahara Reporters, Sadiya and her seven children were displaced from their community due to the activities of bandits in Mabai, in the Kankara Local Government Area of Katsina State.
A source noted that when Sadiya's business became shattered due to the activities of bandits, she and her seven children resulted in eating raw leaves to suppress their hunger.
The lack of food and poor health care have made the eldest son of Sadiya develop a chronic liver problem, it was learnt.
And for over a month, her eight-month-old baby has been battling measles without taking a single medication.
However, Sadiya got empowered with a sum of N40, 000 to start a business at the Mabai's internally displaced persons' camp, and different varieties of food items to sustain herself and the family.
The urgent support became a reality after a Twitter user, @jaymb000, posted a short video clip of where Sadiya and her children were eating raw leaves on a farm.
The video, however, drew the attention of some generous individuals to their plight and they came to the assistance of the family.
While expressing happiness over the kind gesture, Sadiya joyously danced and appreciated those who contributed toward the kind gesture. 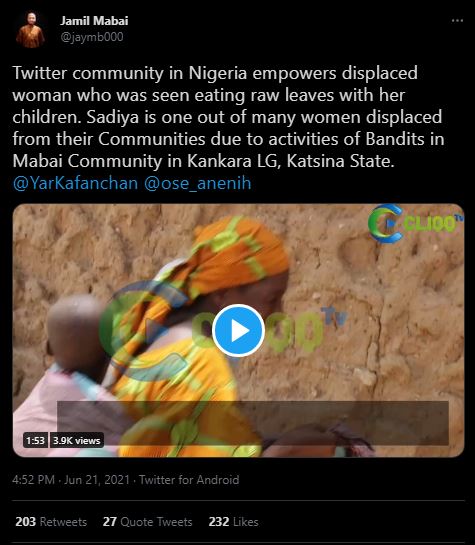