An Islamic cleric has claimed that security operatives are secretly colluding with bandits. 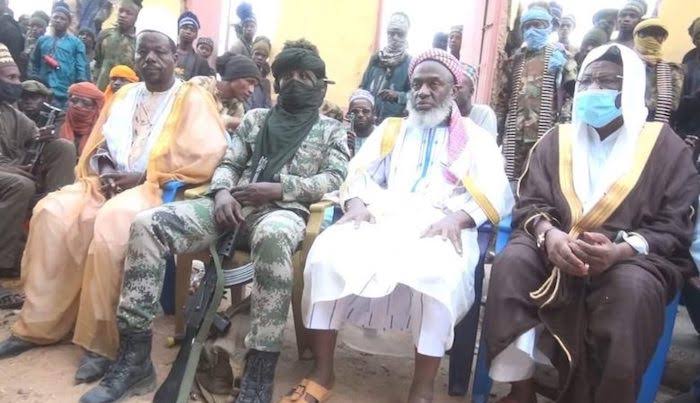 Sheik Gumi and bandits
A controversial Islamic cleric, Ahmad Gumi has revealed that security agents secretly work with bandits.
The cleric, who is known to have access to bandits, made the allegation in a chat with Arise TV on Wednesday.
Gumi alleged that “a lot of bad elements” in the country’s security forces are in collusion with the bandits.
He called it “a business”, claiming the cooperation is the reason the bandits have been able to access the trove of assorted weapons that they own.
He added that an overhaul of the country’s security architecture is a significant step in ending banditry.
“These bandits, if you don’t know, are cooperating with a lot of bad elements in our security system. This is a business. So many people are involved, you’ll be so surprised,” the cleric said.
“They were caught in Zamfara; they were caught everywhere, how do these big weapons cross our borders? How can these big weapons cross our borders and get into the forest without the cooperation of some bad element of the security operatives assisting them? It’s not possible. If I give you the same amount of guns can you take it to the UK? You can’t, because the security is alert.
”Part of fighting this banditry is to overhaul our security system.”
Watch below:
Top Stories