Women Often Reject Me Because I Am Albino – Expatriate Comedian Reveals


Known for his unusual style of comedy, Expatriate who has over 115,000 followers on Instagram, talks about his life as a social media. 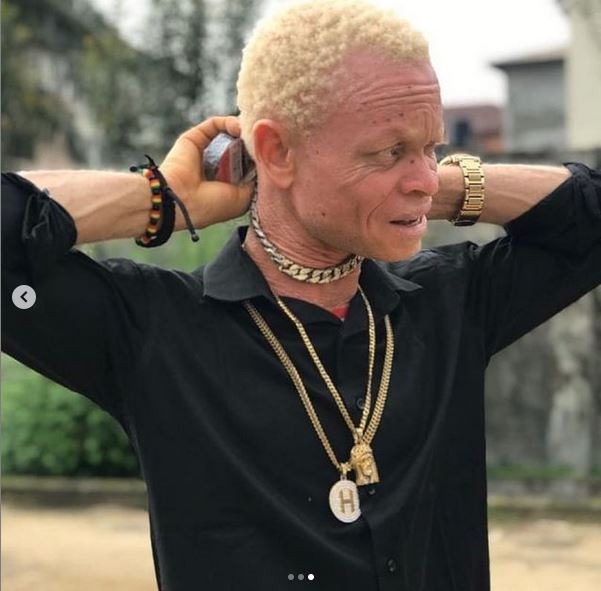 Known for his unusual style of comedy, he has over 115,000 followers on Instagram. He talks to NOAH BANJO about his life as a social media celebrity

Why do you call yourself ‘Expatriate Comedian’?

I am from Etsako East Local Government Area in Edo State. I call myself ‘Expatriate’ because I feel it is a good and catchy name for a comedian. An expatriate is ‘person who lives outside their native country.’ Because of the way I look (as an albino), I decided to adopt that name.

When did you realise you were good at comedy?

Growing up, I played around a lot and I made people laugh. People always told me I was funny and could make people laugh. That was when I knew I could actually do comedy.

When did you start comedy and content creation full-time?

What creative process goes into making your skits?

Firstly, it’s a passion. And because I have a passion for it, it is very seamless for me. I do it with ease, devoid of stress. Most things I say on set come naturally to me. They are not rehearsed. The words, the sense of humour are not things I plan. 95 per cent of what I say in skits are spontaneous.

Which has been the most challenging skit for you to make?

I have a range of styles but none has been challenging to me, so far. That is because I am still discovering myself. I am still learning more about my comedy, so none has been challenging for now. At the same time, I don’t consider any skit to be more interesting than others because I am still discovering myself and trying to broaden my scope. I usually say that ‘Expatriate is my best skit maker’. Not because it’s me, but because the person doing it does it at ease. There are skits I shoot that I don’t find funny, and I don’t like them. I only watch them once and move on.

Some online comedians are switching to mainstream filmmaking. Do you see yourself doing that anytime soon?

Yes, I would definitely do that. That is one of my prayers and I know that it will come to pass by God’s grace. I am not stopping at skit-making. I intend to go into filmmaking as well. And, I am not just talking about Nollywood, I have my eyes on Hollywood as well.

When I was doing music, my parents did not support me. How would they now support my comedy career? If one has not been able to do anything meaningful with one’s career or it is not yielding positive results, most times, people would not support one, especially in this part of the world. Only my younger siblings knew I was doing comedy. They did not even believe I was going to stay this long because they knew I had been switching between music and comedy. I don’t need anybody’s approval for whatever I want to do. I put so much energy, passion and love into whatever I do. Some of my friends did not believe in me and they did not support me. One’s friends could say that one is funny but they may not buy into the idea of one doing comedy full-time. However, the same people who didn’t believe my capabilities now welcome it.

How do you combine being a stand-up comedian with being an online content creator?

I started my career as a stand-up comedian, which I love so much. I actually believe that stand-up comedy is more difficult than online comedy. But, it is what I started with and I love it so much. I enjoy rehearsing and performing on stage but stand-up comedy could be quite tedious. Thankfully, I am still able to do both without stress.

People have different views about albinos. Have you ever been discriminated against on account of that?

In this part of the world, people have different views about albinos. And, I have been discriminated against because of that. Whenever I approach women, they often say, ‘I don’t like albinos.’ I am used to it though. However, I have noticed that people are more accepting of albinos now, unlike what obtained in the past. But, I don’t care. I have no apology for who I am.

What does being an albino mean to you?

Being an albino does not mean anything to me. I wrote a song sometime ago where I stated that the difference between albinos and people with dark skin was just the shortsightedness and skin tone of albinos. In my head, I feel normal. The only thing difference is that I cannot see far and my skin lacks melanin. There is no difference between someone with dark skin and an albino. It is not something I spare a lot of thoughts for. If I travel out of the country, I believe that I would blend in unnoticed and be more accepted. If someone says I cannot do something, I would prove them wrong by doing it well.

Have you ever enjoyed any privileges because you’re an albino?

Yes, I do enjoy some privileges because of who I am. For example, in 2019, I went to register for a voters’ card and the place was crowded. There were hundreds of people ahead of me when I got there but one of the Independent National Electoral Commission’s personnel noticed me. Immediately she saw me, she told me to leave where I was standing under the sun. She then apologised to the people that were there before me, and told them that she would like to attend to me first.

What are the things people don’t know about albinos that you would like them to know?

In this part of the world, people are not that educated about certain things and albinism is one of them. Albinism is simply the lack of melanin in one’s skin. Aside from that and short-sightedness, every other thing is the same with any normal person.

Do you consider yourself a beacon of hope to albinos who want to get into the creative sector?

Well, yes. There are a bunch of albinos coming behind me. Now that I have scaled hurdles to get to this level, I believe more albinos will come along and they will be accepted. So indeed, I consider myself a beacon of hope for albinos who want to go into the entertainment industry. It is the encouragement they get from what I do that would make them look up to me.

What have you gained from being a content creator and a comedian?

I have gained popularity and acceptance. As for material things, I have not gained anything much yet, but I know that would definitely come.

What is your assessment of the comedy industry in Nigeria?

The comedy industry in Nigeria is not organised because there are no structures on the ground for up-and-coming comedians to follow. To me, it is more like a jungle. There are no standard comedy clubs that could aid the development of comedy in Nigeria. It is more of a comic scene than an industry. I feel it is still growing. By God’s grace, my generation would try to restructure things, so that it would be a better industry for people to show their talents and creativity.