In all, no fewer than nine people were shot with five losing their lives instantly while four others escaped with life-threatening injuries. 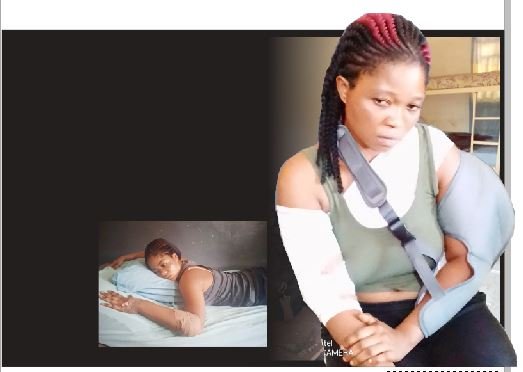 The Nation reports that survivors have relived their ordeal after a policeman guarding their business complex ran amok, shot five persons dead and left four others with serious injuries. DAMIAN DURUIHEOMA visited them on their hospital beds and reports.

More startling revelations have emerged on how a Police Inspector on guard at RC Lotto Company located at Golf Estate, GRA, Enugu shot five people dead and injured four others in the company. Two survivors who escaped death from the killer cop posted to the company to provide security revealed how he went berserk and shot at anyone in sight.

In all, no fewer than nine people were shot with five losing their lives instantly while four others escaped with life-threatening injuries. Among the four officials of the lotto company who escaped death narrowly were two women identified as Elizabeth and Christina.

Narrating her ordeal in an interview with our correspondent at the Enugu State University of Technology Teaching Hospital, Parklane, Enugu where they are currently recuperating, Elizabeth said she and her six of other colleagues had woken up in the company’s premises on that Sunday morning without any premonition of the evil that lurked in the corner.

She said she was outside the building washing her clothes when sounds of gunshots resonated from the gates.

Elizabeth said: “I heard about five or six gunshots and I wanted to go and check what it was. It was then that my elder sister, Susan, ran towards me and dragged me inside our room without any explanation. I met two other girls in our room.

“As we all ran into the room, we saw the policeman trying to force our window open but the window was firmly closed. He shot at the window, shattered it and aimed the gun at us.

“I was already lying down on the bed while my sister, Susan, and the other two girls lay on top of me. Because my sister was the one on top of all of us, I heard her calling on the policeman to have mercy. The next thing we saw was that he opened fire on us and my sister and the other girl died instantly.

“The other girl ran under the bed, and as I tried to join her another bullet caught me on the shoulder. I fell flat under the bed.

“The policeman went out again and we heard other gunshots. He later returned and started calling our names. He even checked through the window to see if we were still alive, but Christina and I pretended as if we were dead.

“After calling our names without any response, we heard him making a call to tell the person at the other end that unknown gunmen had attacked the company and killed seven people.

“We were still pretending to be dead when policemen drove into the premises and we started hearing voices. I also heard the voice of our cook who was now telling them that it was the policeman himself that attacked us.

“So, when the policemen came into our room, they met us there with our bed soaked in the blood of my sister and my colleague. Christina and I were also bleeding from the bullet wounds while the two other girls with us were already dead.”

Asked if the man was drunk and what could have prompted him to start killing people, Elizabeth said: “The man was not drunk. He neither drinks nor smokes. He was always teasing me and calling me Elli. According to him, I strike a very close resemblance with one of his daughters also named Elli.

“In fact, if I didn’t see him shooting, I would not have believed that he could ever attempt to harm us. I don’t know what came over him.”

On her part, Christina said that none of the company’s workers knew the true identity of the policeman despite the fact that he had been working with them since January.

She said: “We all addressed him as officer or Mopol, and we related very well with him. He was working with two other security men who worked as gatemen, and he had lived in the house with us for six months.

“He shot the two gatemen before he came to us. One of them died instantly because he was shot in the stomach. The younger one had his legs shattered.

“I can’t remember seeing him quarreling with anyone. But, I think sometimes in the past, he said something about IPOB or ESN killing policemen and burning police stations. He was not happy about that and said he would finish the IPOB people or something like that. I think that’s the only time I saw him complain.”

It was gathered apparently believing that he had killed everyone in the compound, the policeman moved towards the gates again where he killed two persons: a mechanic in the vicinity and another neighbour who came to see what was amiss.

The two had been worried about the strange gunshots and wanted to be sure that people in the Lotto office were safe, but they did not return to tell the story as the blood-thirsty policeman immediately shot at them, increasing the number of casualties by two.

He was said to have tried to cover up his crime by personally calling the police to say that some gunmen stormed the house and left a heap of casualties behind. But immediately the police arrived, the cook, who was reportedly hiding in a corner, jumped out and narrated what he saw, saying that Police Inspector himself did the killings.

Some neighbours at the Golf Estate who spoke to The Nation on condition of anonymity said they peeped through their windows and saw the policeman shooting but did not suspect anything because none of the victims was heard crying or moaning.

One of them said: “I didn’t hear any cry. That was why I didn’t suspect anything evil. It was when our neighbour went anxiously towards the gate of the premises to find out what the problem was and I heard another two gunshots and the neighbour falling to the ground that I knew something was wrong.

“I was inside my room watching him as he removed his magazine and replaced it with another one. After shooting, he called someone on the phone, and 10 minutes later, policemen came in and he was showing them the dead people, gesticulating maybe to say that the attackers had fled.

“He told the police officers that he killed two of the unknown gunmen. The people he was calling unknown gunmen were our neighbour and the gateman that manned the building opposite the company.

“He was also showing them the places where bullets had pierced when a member of the company’s staff, who I later learnt is their cook, emerged from where he was hiding and started telling them what happened. It was then that the policemen disarmed him and moved inside to bring out the other bodies and those that were still alive.

“But one thing the inspector said was, ‘I will confess, I will confess’. But they didn’t allow him to talk again until other vehicles came there.”