The community of Nigerians in South Africa added that they had to partner with some non-governmental organisations that offer them protection. 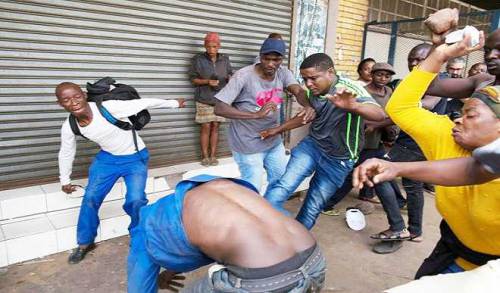 According to a report by SaharaReporters, the Nigerians in South Africa have cried out that they are now living in fear of imminent xenophobic attacks as the threats are becoming more real.

The community of Nigerians in South Africa added that they had to partner with some non-governmental organisations that offer them protection, according to the President of the Nigerian Union in South Africa, Adetola Olubajo.

Olubajo stated these in the wake of the attacks in Diepkloof area, Soweto, where residents threatened a shutdown of shops belonging to foreign nationals if their concerns were not addressed, according to Nigeria Abroad.

“Our undocumented migrants face the law and pay for the crimes they have committed. It is not correct for a group of people to take the law into their own hands. This causes unnecessary strife and threats and attacks,” Olubajo said.

Operating under the banner #OperationDudula, Diepkloof residents and those from surrounding areas marched on June 16 to demand that their grievances about undocumented foreign nationals in the area be addressed.

SaharaReporters had on June 17 reported that violent groups led the protest in Soweto, calling for the expulsion of foreigners and non-nationals which led to tension in the South African city.

SaharaReporters had stated that the protest was tagged “Operation Dudula” as violent posters were shared widely in the town, calling on the non-nationals to leave the Soweto area

A local member of Operation Dudula, however, claimed they were targeting criminals such as drug peddlers, cult members and others.

Some other protesters claimed that they wanted “undocumented, immigrant business owners, to be removed from the area.”

In a memorandum issued to the City of Joburg mayor and departments such as Home Affairs on the high rate of undocumented foreign nationals, #Dudula spokesperson Dan Radebe said, “Undocumented foreign nationals still fill our area and continue to operate their spaza shops and selling drugs. Our people are suffering because of the lack of jobs and the high-crime rate caused by our youth’s need to feed their drug cravings. We need the law to be on our side and to hear our concerns to save the livelihood of our people.”

Radebe highlighted some of the grievances listed in the memorandum.

“We also want regular clean-ups, the removal of illegal advertisements from street poles and electrical boxes, and the end of abuse of children placed at traffic intersections to beg for money.”

Radebe said they had requested “a sit-down” with the office of the mayor within 14 days to prevent a total shutdown in Soweto and other areas in the city.

The mayor’s spokesperson, Mlimandlela Ndamase, said the memorandum had been received and communication with #OperationDudula would be made soon.

Migrant Workers’ Association chairperson Dutholezwe Nyathi acknowledged that many of the migrants who entered South Africa were undocumented and the association was encouraging them to legalise their statuses.