Jumoke Oyeleke was identified as the salesgirl killed by a stray bullet during the Yoruba Nation rally in Lagos on Saturday. 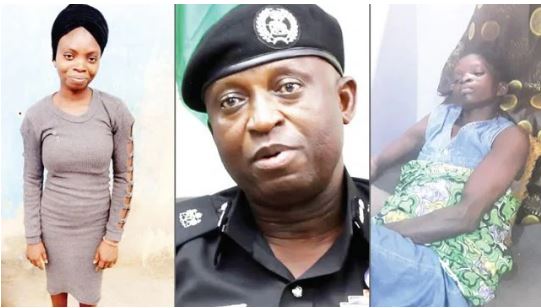 Police accused of killing young girl in Lagos
A woman whose daughter was allegedly killed by a stray bullet has cried out for help.
Jumoke Oyeleke was identified as the salesgirl killed by a stray bullet during the Yoruba Nation rally in Lagos on Saturday.
The mother of the woman has demanded justice for her daughter.
Agitators for the Yoruba Nation gathered at the Gani Fawehinmi Park in the Ojota area of Lagos on Saturday amid heavy presence of armed policemen and soldiers.
Some of the operatives reportedly fired gunshots, tear gas canisters and water cannons to disperse the demonstrators and journalists shortly after the rally took off.
Jumoke was displaying drinks at her boss’ shop in a compound close to the rally ground when security men chased some agitators onto the premises amid shootings.
She was said to have been hit by a stray bullet, which ripped through her stomach and left a deep hole.
Her corpse was later taken away in a police van.
PUNCH Metro learnt that the victim was 25-year-old and not 14, as widely reported.
During a visit to her parents’ house on Sunday, the mother, Ifeoluwa, said the police threatened to shoot her when she demanded her daughter’s corpse.
She said, “I was not at home when the incident happened yesterday (Saturday). I went to work in Ikeja and was called to start coming home. When I got home, I was told that the bullets shot by the police had killed my daughter.
“We immediately went to Area H Police Command in Ogudu and they started threatening us that if we stayed long at their entrance, they would shoot us. It was when they saw that we would not retreat that they invited my brothers inside. I have not seen her corpse since yesterday. The police at Area H said it’s not in their custody, that we should go to other stations to check.
“I want the police to release the corpse for burial because we don’t know where they dropped her. The police should speak the truth because she was killed by a bullet. The police lied that it was an abandoned corpse; we both left home around 7.30am yesterday to our different destinations.
“Jumoke is my first child and she was a very healthy and good child; a very hard-working girl that won’t complain if you asked her to do anything. She said she wanted to save money from the job she was doing so she could own her shop and become a better person in life, but that dream has been cut short now.
“I want the state government to fight for me and render whatever help they can to me. It has not been easy since yesterday; it has affected me in every way because she’s the one helping to cater for her siblings.”
Jumoke’s uncle, Wasiu Afolabi, told PUNCH Metro that the family got to know about the incident through the social media.
He said, “When we got to the police station, they didn’t allow us to enter until we started shouting, then they allowed two people to enter. When we entered, we met the DCO and he said he was not around when the incident happened, but asked us to go to the counter to drop our information and that they would get back to us. But my younger ones were not having it at all, so the area commander requested to see us and when we entered, he sympathised with us and said he heard that the bullet police shot hit the girl.
“He asked us to be patient so that the police could remove the bullet in her body and test it to know if it was from their station or other stations and he collected our details and said he would get back to us. About 30 minutes later when we got home, the area commander and the DPO came to visit the mother of the victim.
“What we heard now is that the police are saying it was not a bullet that killed her, but that she was stabbed. The woman with whom she was running together confirmed that she was beside her when the bullet pierced her and she fell on the ground. We want justice.”
A witness, Ibrahim Taofeek, who described the incident as tragic, said the police chased some of the protesters into the compound where the deceased died.
He said, “I and a lady were sleeping on a chair around 11.30am while the girl that was murdered was arranging her yoghurts out there. When the police started firing tear gas and bullets in the air, many people rushed into the compound.
“It was the gunshots that the lady heard that made her to run inside with others. I was not sure what was happening, so I hesitated a bit. But when I saw that everyone was fleeing, I also left the scene and ran inside.
“When I got inside the compound, I found her lying on the ground. I initially thought she fell while we were fleeing, so I continued running. Along the way, I met a boy who also fled with us; he told me that the police had shot the lady who was in the house.

“As we returned to check her, we saw people running towards us, saying the police were returning to the scene, so we fled again. It was when the pandemonium settled that we realised that it was this lady that was shot. It was then we carried her body outside and the police carried the corpse away.”
Another resident, who identified himself simply as Tanitolorun, said the bullet pierced the deceased from the back and came out from her chest.
“When we raised her body, we saw a bullet hole at her back. The bullet entered through her back and came out from her chest, close to her heart,” he added.
The Attorney-General and Commissioner for Justice, Lagos State, Moyosore Onigbanjo (SAN), in a statement on Sunday, said the state Governor, Mr. Babajide Sanwo-Olu, had ordered an investigation into the death.
“The state assures the public that everything will be done to ensure that the cause of death is known. The findings of this investigation will be made public in due course and appropriate sanctions meted out to anyone found culpable,” the statement added.
Meanwhile, the state Commissioner of Police, Hakeem Odumosu, has paraded 49 suspects who allegedly participated in the protest, including an Ogboni chieftain, Tajudeen Bakare, and a lawyer, Olanrewaju Agbeniyi.
While briefing the press at the command headquarters in Ikeja on Sunday, the police boss said “unfavorable intelligence” prompted the state government and the police to kick against the protest.
He noted that Lagos had yet to recover from the destruction that accompanied #EndSARS demonstrations in the state, adding that the Yoruba Nation rally was aborted due to security threats.
Odumosu said, “The suspects arrested included Bamidele Akomolafe, 52; Dauda Abubakar, 25; one Adebanjo, 42; Hakeem, 21; Abdulsemiu Akanbi, and 44 others. Items recovered from them included one OPEL car, with number plate FFF 921 RI, one unregistered Toyota RAV 4, one Honda Accord car, one Nissan Pathfinder, two Suzuki minibuses, one crown, a walking stick, a white box containing assorted charms, some Oodua Nation flags and banners, caps and cloths with some Oodua inscriptions, and with Oodua Armed Forces, among others.”
Speaking with PUNCH Metro, Bakare said he was returning from worship when the police accosted him and his members, adding that they were not part of the protesters.
He said, “I am Tajudeen Bakare, the king of the Ogboni in Lagos and I have my members. Every first Friday is worship day for us. It starts at 11pm and finishes around 5am. I am the owner of the Jeep and my members were also in the car.
“But because we did overnight work, we couldn’t go home. So, we had to sleep until 10.30am, when we left for Ikorodu. We were on our way when somebody called to say that my money was available and told me to come to 7up to collect it. But as we were returning, and were descending from the bridge to link the Ikorodu Road, the police stopped us.
“The first set of police that stopped us checked my vehicle and told us to go, but it was unfortunate when the second set of police stopped us and after checking my vehicle said we could not go. As a king, I have my crown in the car; my Yeyelufe, Abiodun Taiwo, and Taiyese were also with me. We were not going for the rally; we were coming from where we went to worship.”
Another suspect, Agbeniyi, said, “I am a legal practitioner and a member of the NBA Lagos branch. I and my friend agreed to meet at Ketu so we could from there go to Ikorodu, but men of the Rapid Response Squad stopped us and after searching us, the officer said we could go.
“But one of them insisted that we could not go because if a sinner is suffering, the righteous will also suffer and that was how we were arrested. The police collected my phone and I have not been able to communicate with my family.”
Top Stories