He was arrested by the Lagos Zonal Office of the Economic and Financial Crimes Commission, EFCC on July 19, 2021. 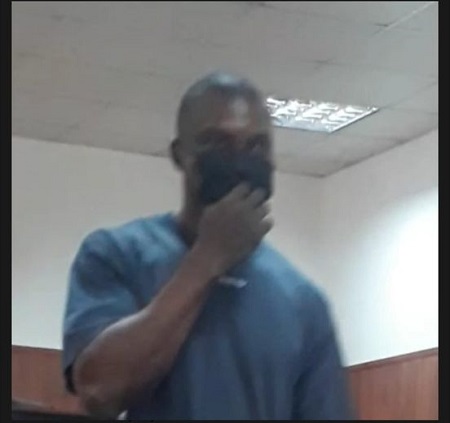 Adebola
A suspected criminal, Ahmed Soetan Adebola has been arrested and arraigned before Justice Mojisola Dada of the Special Offences Court sitting in Ikeja, Lagos.
He was arrested by the Lagos Zonal Office of the Economic and Financial Crimes Commission, EFCC on July 19, 2021.
He was arraigned on a six-count charge bordering on possession of document containing false pretence contrary to Section 318 of the Criminal Law of Lagos State, 2011.
One of the counts reads: "Ahmed Soetan Adebola sometime between 2019 and December 2020 in Lagos within the Ikeja Judicial Division of this Honourable Court retained in your control several Credit Cards titled, "DELTA SKYMILES" AMERICAN EXPRESS which you used in making payments for your hotel bills, which Credit Cards you knew to have been obtained from unsuspecting members of the public."
Another count reads: "Ahmed Soetan Adebola on or about 16th day of December, 2020 in Lagos within the Ikeja Judicial Division of this Honourable Court with intent to defraud had in your possession document titled "MANAGER'S CHEQUE" NO: 3052643382 dated 23-12-2020 drawn in favour of ANCHORAGE LEISURES LIMITED (RADISSON BLU) in the sum of N1,200,000 (One Million Two Hundred Thousand Naira) in order to deceive unsuspecting members of the public, which representation you knew to be false."
He pleaded "not guilty" to the charges.
Subsequently, the prosecuting counsel, Ebareotu Pereagbe, prayed the Court for a trial date "to enable the prosecution prove its case against the defendant".
Adjourning till October 18 and 19, 2021 for trial, Justice Dada further ruled on the bail application of the defendant which was before the Court and granted him bail in the sum of N500,000 with one surety in like sum, who must have landed property in Ikeja and must show evidence of tax payment in past three years.
Top Stories