The fifteen-year-old orphan shared graphic details how he was assaulted by the man's wife. 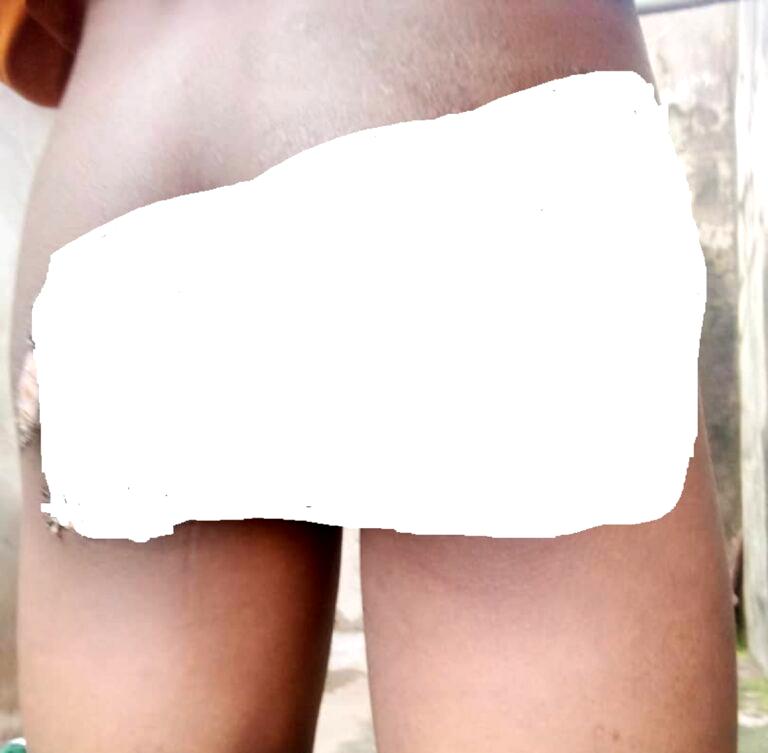 Graphic photo of the affected body area
A retired Air Force officer, Mr Bernard Ugwueke and Wife, Mary may have landed in trouble after torturing a 15-year-old in their care at Kuje area of the Federal Capital Territory, Abuja.
The fifteen-year-old orphan and an indigene of Emudo-Nenwe in Aninri Local Government area of Enugu, Master Chimdalu Ugwueke narrated his survival from torture, starvation and and grievous body harms meted on him.
Narrating his ordeal before newsmen in Enugu, Chimdalu said that he had suffered the dehumanising treatments from the couple, particularly from Mrs Mary Ugwueke for over one year before his eventual escape and rescue by good Samaritans who helped and brought him down to Enugu State.
He narrated that Mrs Ugwueke turned him into the most dehumanised modern slave, by forcing him to serve Mason as a labourer and work in the poultry farm simultaneously; forced him to do so many jobs above his age from 6am to 6pm daily, starved him of food on so many days for little or no mistake.
Chimdalu said that even when other domestic staff out of pity and compassion offered to help him, Mrs Ugwueke would deal and threatened them, subjecting him to unbearable pains.
Chidalu further narrated that he was unlawful detained inside one room for four days without food, at some point jointly beaten by Mrs Ugwueke and her children with the knowledge and approval of the husband, Mr Ugwueke, beaten with different object including using hot iron to design his body.
He said that the last torture that made him escape was when the woman and his children used electric iron to inflict grievious body harms on different parts of his body which made him unable to sit it lay down.
When Vanguard called Mrs Ugwueke to ascertain her own side of the story, she expressed hostility to our reporter and switched off her phone.
Chimdalu’s representative in Enugu state House of Assembly, Hon. Chinedu Okwu has however petitioned the National Agency for the Prohibition of Trafficking in Persons, NAPTIP, asking the agency to investigate the matter and bring the culprits to Justice.
Okwu said he had been petrified and emotionally downcast after being confronted with the story of the young orphan and the disturbing injuries inflicted all over his body including his eyes.
“I plead that you use your good office to arrest and investigate the suspects to serve as a deterrent to others of their likes even though I have it on good authority that the suspects were already boasting that nobody can arrest a retired military officer or his wife,” Okwu petitioned.
Top Stories