Nigerian lawyer and activist, Femi Falana has made some revelations concerning Igboho's extradition. 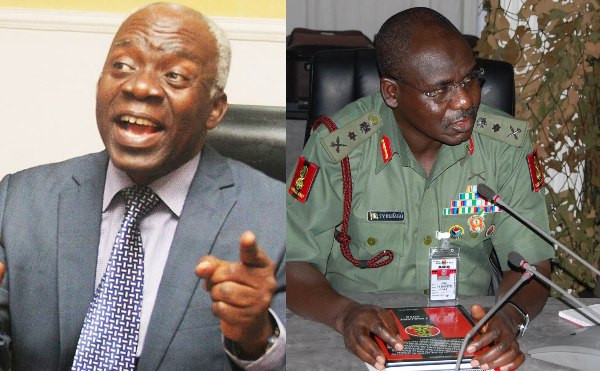 Falana and Buratai
Human Rights lawyer, Femi Falana has revealed that Tukur Buratai had asked Yoruba agitator, Sunday Igboho to be handed over to him.
Recall that Buratai is Nigeria’s ambassador to Benin Republic.
However, his request was turned down as Benin Republic insisted that the country follows rule of law.
In an interview on Channels Television on Thursday July 29, Falana claimed that Buratai made the request when he had not submitted his letter of credence to Benin Republic's President. He also said that he learnt there were attempts to throw Igboho in a waiting plane for return to Nigeria.
Falana said;
“In the case of Sunday Igboho, again despite my disagreement with him, I came out to say you cannot just throw him into a waiting plane as we were told, it was attempted.
“You have to go to court. You have to make a request under international law, under the ECOWAS convention on extradition.
“The government of Nigeria is requested to submit an extradition request to the government of Benin Republic and so when the plenipotentiary, General Yusuf Buratai (retired), who at that time had not submitted his letters of credence asked that Igboho be handed over to him.
“He was told, ‘sorry, we operate the rule of law here’. That is why that matter is still in court.”
Noting that he is opposed to the campaign of the balkanisation of Nigeria, Falana however added that the law guarantees the rights of self-determination.
Speaking further, the senior lawyer explained that amid the agitations in some quarters that the nation should split, the Federal Government owes it a duty to convince the agitators by reposing confidence on the corporate existence of Nigeria.
Stressing that it is not a criminal offence for some persons to make separatists demands, Falana said the current administration should respect human rights in line with Article 20 of the African Charter on Human Rights.
He said;
“Personally, I am strenuously opposed to the campaign for the balkanisation of Nigeria because I believe the masses of our people are oppressed by the ruling class and imperialism.
“To that extent, I have a fundamental ideological disagreement with those who are calling for the breakup of the country along ethnic lines.
“If a group of people decides to fight for the breakup of the country, the duty of the government is to try as much as possible to convince them to repose confidence in the corporate existence of Nigeria.”
Top Stories