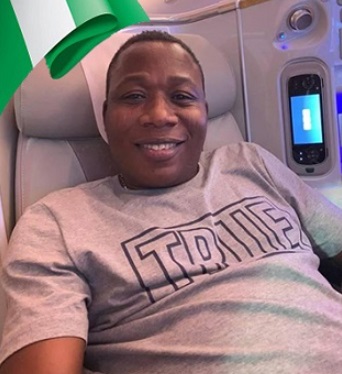 Sunday Igboho
Yoruba nation agitator, Sunday Igboho might have his asylum request in Benin Republic granted this week.
According to Punch, the latest move comes as his bail application was delayed by his lawyers because of his medical report and the expected outcome of his asylum application among others.
The PUNCH had reported that Igboho’s lawyers were considering different options to get him out of a detention facility in Cotonou without being extradited to Nigeria.
Igboho and his wife were arrested on Monday, July 19, 2021, by the International Criminal Police Organisation at the Cadjèhoun Airport in Cotonou, Republic of Benin on their way to Germany. Ropo was later released.
This was after DSS raided his house in Ibadan and declared him wanted for stockpiling arms.
When he was re-arraigned last Monday, fresh charges were levelled against the 48-year-old activist, who was also returned to a new detention facility.
The Coordinating counsel for Igboho, Olasupo Ojo, said he was yet to get any official report on his asylum.
Asked if Igboho had been granted asylum, he said, “I have not got any official report in relation to that.”
“Yes, we are expecting feedback this week,” he added when asked if Igboho’s asylum application feedback may be out this week.
Also, the spokesperson for Ilana Omo Oduduwa, Maxwell Adeleye, said the organisation is expecting a positive response.
“We have submitted an application and we are hoping to get a positive response before the end of the week,” he told The PUNCH on the telephone.
Ibrahim Salami, one of the Cotonou, Benin Republic-based lawyers of Igboho, had explained that charges against Igboho would be neutralised if the activist is granted asylum.
Salami said this while explaining that Igboho was not arrested for possessing a Benin Republic passport despite not being a citizen.
The lawyer had said, “When he left Nigeria, he took the backdoor into Benin. It was at the airport that security operatives stopped him that he was on the watchlist. He didn’t go against any law in Benin Republic. They didn’t find any Beninese passport on him. He had a Nigerian passport with a German residency card. He needed no visa at that point.
“When we understudied the case, we realised that the Nigerian government had not filed a case for extradition. They only claimed that he is wanted in Nigeria for criminal offences. Our argument is that he was arrested because of Nigeria’s request, and there is no proof to show that he is a criminal. He spent barely 24 hours in the country and filed an asylum.”
Top Stories