The lawmaker met his constituents in a sorry state during a recent visit to an internally displaced persons' camp in the neighbouring country. 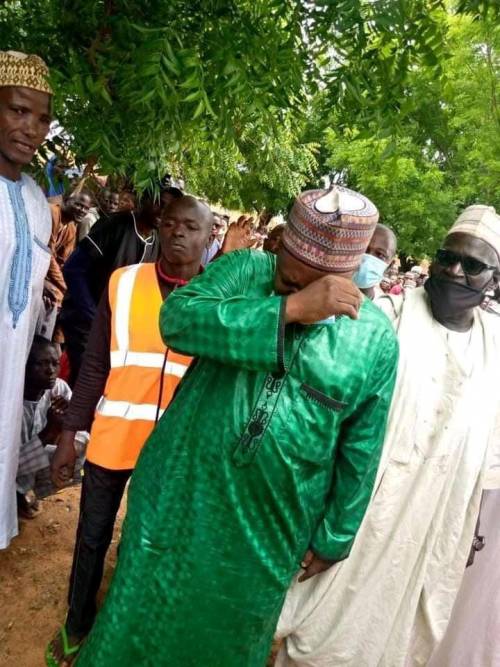 The lawmaker shedding tears
A Nigerian lawmaker and member of the Sokoto State House of Assembly couldn't hide his emotions as he cried after seeing thousands of his constituents living in the Niger Republic as refugees.
According to Sahara Reporters, the lawmaker met his constituents in a sorry state during a recent visit to an internally displaced persons' camp in the neighbouring country.
They were reportedly displaced by bandits and other insurgent activities in Nigeria.
Pictures obtained by SaharaReporters showed the lawmaker in an emotional state.
The Boko Haram insurgency has displaced nearly 2.4 million people in the Lake Chad Basin, a December 2020 report by UNHCR stated.
According to the report, Nigerian refugees totalled about 304,562 while there are about over 2.1 million internally displaced in Nigeria
Meanwhile, the UNHCR spokesperson, Babar Baloch, at a press briefing at the Palais des Nations in Geneva, said since April 2019, 25 per cent of the refugees who fled from relentless attacks by armed groups came from Sokoto, Zamfara, and Katsina states of Nigeria.
He said as a result of insecurity at the border region in Nigeria, an additional 19,000 Niger nationals have become displaced inside their own country.
The official also said the humanitarian agency is concerned about the influx of the refugees, “mainly desperate women and children, following the deteriorating security and attacks inside Nigeria’s Katsina, Sokoto and Zamfara states, also the risk of armed incursions spilling over into Niger.”
Top Stories