The 34-year-old lesbian woman who killed her children has been identified as Busisiwe Labi. 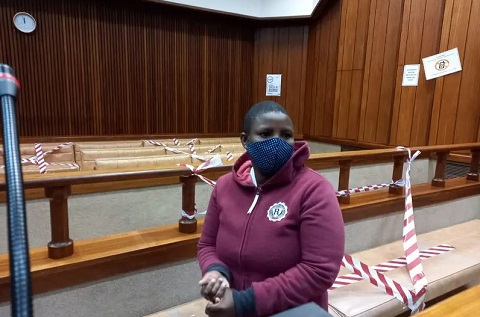 Busisiwe
A lesbian woman has been sentenced to 22 years in prison for killing her two children.
The tragic incident happened in South Africa.
The 34-year-old South African lesbian has been identified as Busisiwe Labi.
Judge Belinda Hartle of Bhisho High Court Judge in the Eastern Cape handed Labi the jail term on Thursday, August 19, for each of the children's murders but ordered that the sentences run concurrent.
NPA Regional spokesperson, Anelisa Ngcakani, said Labi had lived at her home in Dimbaza with her children, her mother and her two siblings.
Labi suffocated her two boys to death, one-year-old Othandwayo and six-year-old Amyoli, with plastic bags at their home last September.
Before murdering them, she informed the children of her plans to kill them. The eldest boy, Amyoli, pleaded with her not to do so but his plea fell on deaf ears. She prayed with the boys, took turns to suffocate them to death with plastic bags and pillows and thereafter laid their bodies neatly on a bed.
Labi was found guilty of the two murder charges on 22 July 2021.
A Psycho-Legal report presented in court revealed that Labi confessed to being a homosexual in sexuality since Grade 7 and that her family did not approve of her sexuality.
The report further stated that Labi had said that she engaged in heterosexual relationships with the fathers of her children because her family did not approve of her homosexuality and that her mother wanted grandchildren. She further added that she had boyfriends to satisfy her mother.
Judge Belinda Hartle during sentencing quoted Labi's sentiments that although she loved her children she didn't want to be a mother.
The court also heard that Labi had a conflicted relationship with her mother as she allegedly never revealed the identity of Labi's father until she was in high school. The report revealed that Labi was angry towards her mother and felt betrayed.
“A day before murdering her boys Labi got into an argument with her mother as the mother gave her younger brother money which was meant to be used for items in the household. Labi felt that her mother favoured her brother over her. It was revealed during sentencing that Labi also murdered her two boys because she wanted to cause her mother grief as the mother had a close relationship with her grandchildren,” Ngcakani said.
After Labi murdered her children she phoned her 42-year-old sister and told her what she had done. The matter was reported to the police who found the bodies of the boys at their home.
Although Judge Hartle agreed with the prosecutor, Advocate Deolin Willemse, that the offences committed were “spine-chilling”, “horrific” and that “leniency for mercy's sake would be wrong”, she ruled that there were compelling circumstances present in the case to diviate from the prescribed minimum sentence of life imprisonment.
Judge Hartle stated that one of the reasons was that, in spite of the murders being premeditated in that she waited until she was alone with the children in the house to murder them, Labi cooperated with police from the onset and gave a detailed confession of events leading to the murders and the actual murders.
The Acting Director of Public Prosecutions, Mr Livingstone Sakata, said that the crimes were a betrayal of life as the mother murdered her offsprings. He added that justice must prevail.
Top Stories