The doctors had commenced the strike on August 1 over “irregular payment of salaries”, among other issues. 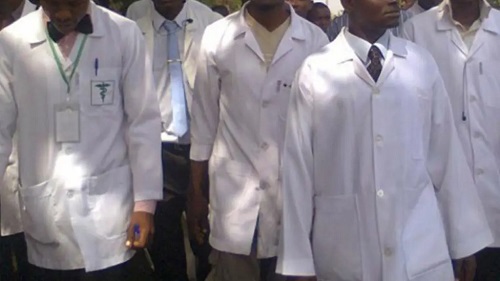 Doctors
The Nigerian Association of Resident Doctors (NARD) has been given an order to suspend its nationwide strike.
The order was given by the National Industrial Court, Abuja division on Monday.
The doctors had commenced the strike on August 1 over “irregular payment of salaries”, among other issues.
Efforts by the house of representatives to mediate between the federal government and NARD ended in a deadlock.
The federal government then instituted a suit against the association, asking the court for an order of interlocutory injunction restraining members of NARD from continuing with the industrial action.
Ruling on the ex parte application on Monday, John Targema, the judge, asked all parties in the suit to suspend all forms of hostilities and maintain status quo pending the hearing and determination of the motion on notice.
He said: “Having looked especially on the affidavit of extreme urgency, the grounds of the application, the affidavit in support of same and arguments of counsel for the applicant. I also weighed the submissions and arguments of counsel on the law as it stands on this application.
“It is hereby ordered that claimant/applicant and the defendant/respondent suspend all forms of hostilities forthwith pending the hearing and determination of the motion on notice.”
The judge further ordered that a hearing notice be issued and other processes be served on the defendant, including the originating summons. He also added that the proof of service should be kept in the case file before the next adjourned date.
Targema adjourned the matter to September 15 for a hearing of the motion on notice and/or any other pending application on its merit.
Top Stories