According to the victim, he invited her into a mini office where he demanded sex from her while pointing a knife at her with a threat to kill her if she resisted him. 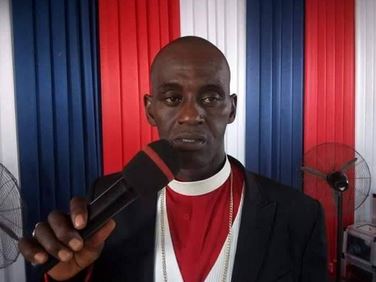 The General Overseer of the Image of Christ Deliverance Philadelphia Central Church, Apostle D. Franklin Snorton, has been arrested by the police for allegedly having unlawful carnal knowledge of a 21-year-old pregnant woman.

The incident allegedly occurred at the pastors Mandingo Quarter community residence in Kakata.

The suspect was expected to be arraigned before the Kakata Magisterial Court on Monday, August 23, 2021.

Apostle Snorton, who is a neighbor to the rape survivor, was arrested in Kakata on Friday, August 20, 2021, after his alleged rape survivor’s father reported the case to the Women and Children Protection Section at the Margibi County Detachment of the Liberia National Police.

The father of the alleged rape survivor explaining his daughter’s ordeal said, she (name withheld) was requested by her grandmother during the early hours of Friday, August 20, to deliver electricity bills of L$1,000 to Apostle Snorton.

He narrated that when his daughter reached Apostle Snorton’s residence, he reportedly lured her into a mini office in his house.

According to the father, his daughter had explained to him and the police that when she got at his house, he invited her into a mini office where he demanded sex from her while pointing a knife at her with a threat to kill her if she resisted him.

He said his daughter further alleged that Pastor Snorton had been harassing her for sex before the rape incident.

Minutes after the alleged rape, his daughter ran back home to informed her grandmother about the incident.

He explained that his daughter’s grandmother hurriedly phoned him and reported the matter to other family members.

He added that his daughter’s ordeal triggered the family to report the case to the Women and Children Protection Section at the Margibi County Detachment of Liberia National Police.

Police sources have confided in FrontPageAfrica that a medical report from the One-Stop Center in the county where alleged rape survivors are tested shows that there is trauma to the victim’s vagina evidence of penetration.

Meanwhile, some journalists have raised alarm of receiving death threats for reporting on the alleged rape case involving the pastor. Watch video from the press conference.