Kanu's lawyer, Aloy Ejimakor had on Monday revealed that members of the group are sending death threats to him. 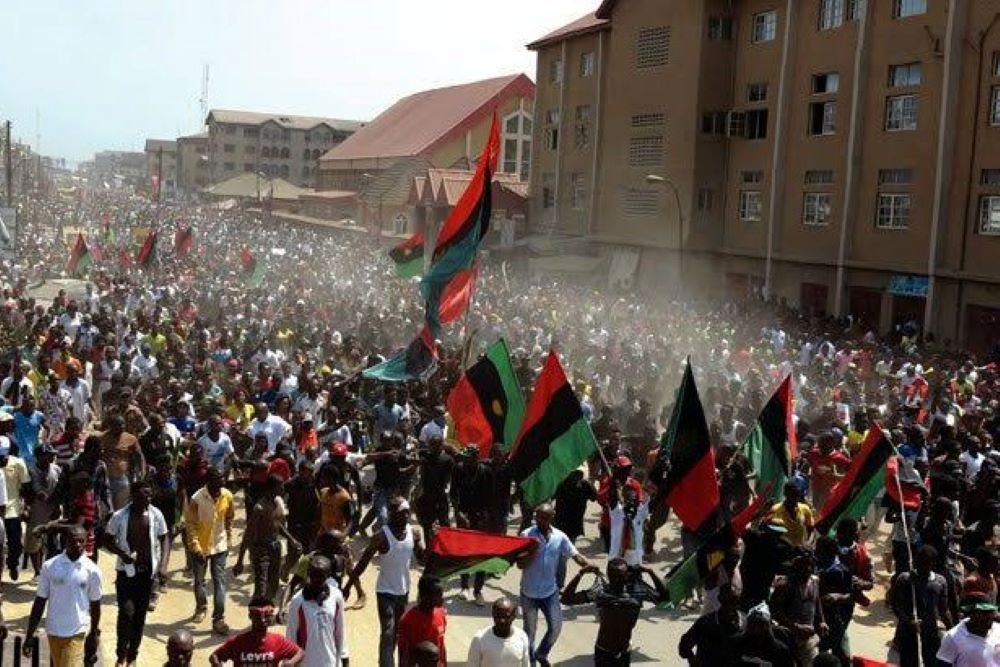 IPOB
The Indigenous People of Biafra has sent a message to all its members after lawyer to Nnamdi Kanu, leader of the group said he's getting death threats from Biafra supporters.
Kanu's lawyer, Aloy Ejimakor had on Monday revealed that members of the group are sending death threats to him.
The group stated that those who are behind such acts would have themselves to blame as IPOB leadership does not have any conflicting issue with him and other legal counsels.
IPOB’s Media and Publicity Secretary, Emma Powerful, disclosed this to SaharaReporters on Tuesday while reacting to the Ejimakor’s alleged death threats.
SaharaReporters had reported that Ejimakor stated that he received death threats “from people I’ve been defending for years.”
In a tweet on his verified Twitter handle on Monday, Ejimakor linked the threat of murder from IPOB members to the controversial suspension of the sit-at-home directive by the IPOB leadership.
He clarified that Kanu, in the detention of the Department of State Services, Abuja, did not pass the sit-at-home order that was started about three weeks ago through him (Ejimakor).
He noted that the message “was already delivered by others days before I visited him on 9th August.”
“I can no longer keep quiet because I’m receiving DEATH THREATS from people I’ve been defending for years. Hear this: Onyendu DID NOT pass the SIT AT HOME message through me. The message was already delivered by others days before I visited him on 9th August. Check social media,” Ejimakor wrote.
Reacting on Tuesday, Powerful said that, “Aloy Ejimakor has no issues with IPOB leadership, and those talking rubbish about him are doing that to their peril. We have nothing against him.”
IPOB’s spokesperson also reacted to the sit-at-home order observed by the members of the group and residents of the South East yesterday.
The group said the people did not disobey but boycotting of commercial activities from them indicated a deeper love for the separatist leader, Nnamdi Kanu.
According to the Powerful, the people did that to show love and gratitude to Kanu and IPOB not minding what they have to lose in terms of monetary profits, adding that they were not scared nor forced.
Top Stories