On Saturday, August 14, some travelers were killed by gunmen in the Jos North Local Government Area of the state. 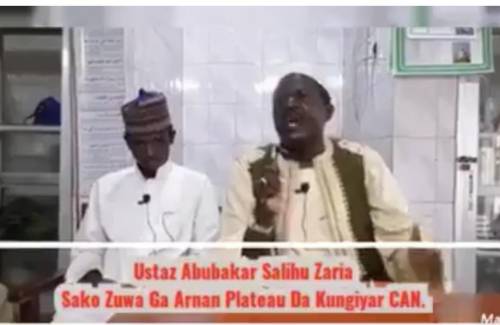 According to a report by SaharaReporters, an Islamic cleric in Plateau State, Alkali Abubakar Salihu Zaria, has threatened to kill Christians if Muslims are attacked again.

On Saturday, August 14, some travelers were killed by gunmen in the Jos North Local Government Area of the state.

The sojourners were returning from Bauchi State where they attended an event to commemorate the Islamic New Year when they ran into gunmen who opened fire on them.

Reacting during a sermon, Zaria stated that if such occurs again, the lives of many Christians would be sacrificed in northern states.

He called on President Muhammadu Buhari and governors of northern states to rise to the occasion and put a stop to the killing of Muslims.

“I am the one speaking, I am Alkali Abubakar Salihu Zaria.

“We are not fools and we are not afraid of anyone. If nothing is done, we will take the law into our own hands because no life is superior to others and I swear, compensation must be paid for the lives of the people lost (Jos Muslim commuters).

”The nonsense they are doing to us is enough! And we challenge our leaders, we challenge our representatives, we don't see their use. They are useless. Stupid and worthless people (leaders). You are enjoying AC in your offices but don't care about the lives of your people (talking about Muslims).

“Nasiru Ahmed El-Rufai is far better, may God bless you. I swear to God, If that incident had happened in Kaduna State under Nasiru El-rufai, they would have been taught a serious lesson.

“They keep killing God's people without any reason. We hear they kill us with weapons (talking about bandits). Over there too they waylay and kill God's people. The most baffling thing is that the commuters killed were not even citizens of Northern Nigeria; they were only traveling along the road. Brethren if you watch the video, how they slaughtered persons, how they hit their heads on the pavement.

“They killed Our General, Alkali, they killed our Fulani leaders, they've also killed many God's people. You block the road, stop vehicles. Those vehicles are government vehicles. You brought out the passengers and slaughtered them one after the other and mutilated their flesh.

“Did God send Buhari to us? I swear we won't accept this, I swear we will not agree. The government must take action. They followed the people of God to Eid ground in Rukuba and slaughtered them, roasted their flesh, and eat yet no action was taken but when one infidel is killed in the beer parlor, people will keep mourning on the newspapers, like Daily Trust, weekly trusts, Thisday etc. but our lives are of less value. I swear we won't tolerate such, this will not happen.

“We have leadership in Islam, we are waiting for them to speak but we will never agree, we won't accept this, the killing of people is too much. They are claiming that Plateau is their state, a Christian state, that's a lie, let them do a census, let them count people and see.

“Who are the people that marry 4 wives, Muslims or infidels? Who gathers 50 children on earth, Muslim or infidels?

“I swear this will not go unpunished, we won't accept this, action must be taken and if they don't take action, we will also react in our states.

“Every infidel should prepare; he will leave the earth if nothing is done about our people that were killed in Jos. I swear, we will revenge and you should know that the life of one Muslim is equivalent to 100 infidels.

“That is the truth, the life of one Muslim is equal to 100 infidels. No life is greater than another. It is either action is taken or they will see what they don't like.”

He concluded by saying some Muslim prayers in Arabic.

Meanwhile, the Director-General, Centre for Justice on Religion and Ethnicity in Nigeria, Kallamu Musa Ali Dikwa, condemned the video, urging security agencies to start the probe of the Islamic cleric.

Dikwa, who is a Christian cleric, stated that for the past two weeks, innocent Irigwe youths had been killed in retaliation for the attack.

He stated that if the utterances made by Zaria had come from a Christian cleric, the security agencies would have invited such person for questioning.

“Every day now, the Fulani terrorists have continued to attack Irigwe communities, killed them and destroyed their farmland. Over 70 people have been killed in three weeks in Irigwe land but no single Muslim leader from the north came out to condemn the killings of Irigwe people," he told SaharaReporters

“There are claims by the Fulani leaders and Islamic leaders that these Fulani victims are innocent. Please can someone amongst them answer these questions: (1) According to some print media the victims were in 5 Hummer buses, why is it that pictures/registration numbers of the buses are not captured? (2) There is an ambulance amongst the buses? (3) The buses were intercepted buses by security agents, why is it that the security agencies are hiding the truth?

“(4) The so-called Sheikh Alkali Abubakar said in his video the buses belong to the government, we want to know if the buses are for Ondo, Bauchi or the Federal government?

“Christians are being killed; we have all the records of their names and pictures of the Christians that have been killed from Adamawa, Bauchi, Borno, Gombe, Yobe, Jigawa, Kano, Katsina, Kaduna, Kebbi, Sokoto and Zamfara states.

“Sheikh Alkali Abubakar is simply informing us that they are going to use the recent incident to continue with their normal activities of terrorizing the Christians from the north.

“If it's a Christian cleric that made these utterances as this so-called Sheikh, the security agencies could have invited him for interrogation. But since he is a Muslim cleric, he can say anything he likes and goes free. Does it mean Muslim clerics are not bound by Nigerian law?”