The warning was given by a Peoples Democratic Party support group, the PDP Action 2023. 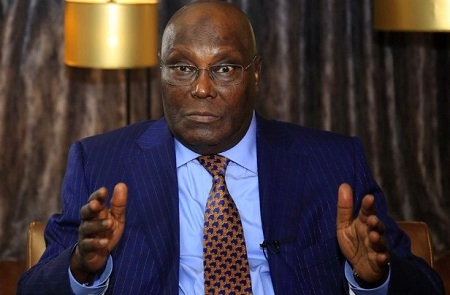 Atiku Abubakar
A former vice president, Atiku Abubakar has been told to jettision any plan to contest in the 2023 presidential election.
The warning was given by a Peoples Democratic Party support group, the PDP Action 2023.
The group, which stated this in a statement signed and issued to journalists in Abuja by its Chairman, Mr Rufus Omeire, on Wednesday, argued that age would not be on Atiku’s side as he would be 77 years by the year 2023.
It also accused the ex-VP of abandoning the party after the 2019 general elections on the pretext that he now lives in Dubai, where he is seeking to improve on his education, to learn how to govern Nigeria.
According to the PDP support group, Atiku deserted the party at the time of its recent leadership crisis, saying that he becomes interested in the internal affairs of the PDP only when it was time for the presidential nomination.
The statement reads in part, “It is very shameful that since he lost the presidential election, he moved to Dubai, abandoning all members of PDP, all the stakeholders, and millions of ordinary Nigerians who voted for him and PDP in 2019.
“As the PDP was embroiled in crises, two weeks ago, one would have thought that as the last flag bearer of the party, that he would stay engaged to find a solution.
“It is a betrayal of trust for Abubakar to neglect the feelings and sacrifices of ordinary voters who supported him and PDP in 2019.
“Now 2023 elections are once again at hand, he has returned and started politicking once again. Apparently, the only thing he is very good at, is politics.”
The PDP group rather advised Atiku to aim at becoming the chairman of the party’s Board of Trustees (BoT), and not to its 2023 presidential candidate.
Top Stories