In a traffic alert notice, the Federal Road Safety Corps (FRSC) advised the motoring public to avoid the road. 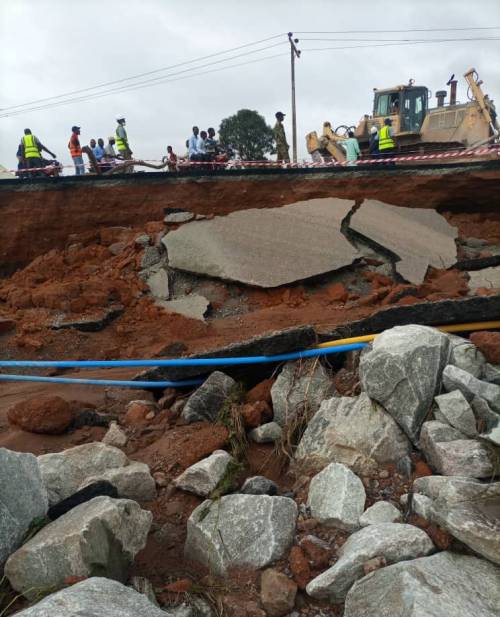 According to a report by SaharaReporters, a section of the Lokoja-Kabba Federal Highway in Kogi State has caved in, subjecting commuters to traffic gridlock and frustration.

The portion of the bad road is between Zariagi and Obajana cement factory.

The affected lane on the road has been cordoned off, leaving motorists to a narrow section.

In a traffic alert notice, the Federal Road Safety Corps (FRSC) advised the motoring public to avoid the road.

“Members of the motoring public and general commuters travelling from or to Southwest, through Lokoja-Kabba- Federal Highway are hereby notified of the caving in of a section of the road between Zariagi and Obajana cement factory.”

“This development has led to an obstruction of free flow of traffic. As all the concerned authorities are making frantic efforts to carry out emergency repairs to restore the normal flow of traffic, the emergency work may take some hours to complete.

“In view of the foregoing, motorists, travellers, and the general public are hereby advised to use Lokoja-Okene-Kabba, or Lokoja-Okene-Ogorimangogo as alternative routes to or from South-West.

“The Federal Road Safety Corps solicits maximum cooperation of the motoring public on this development. The Corps will also continue to update the public periodically on further developments on the ameliorative work going on at the failed portion of the road,” read the notice issued by Bisi Kazeem, FRSC’s spokesman.

Though a federal road, the affected portion subjects Kogi residents to lots of discomfort as the state governor, Yahaya Bello, also seemed not to have drawn the Federal Government’s attention to the deplorable state of the major road.