Gambo said one of the three suspects, Abdullahi Mai-Rafi, was a notorious bandit and was working under the office of Special Assistant to the State Governor on Security since he repented. 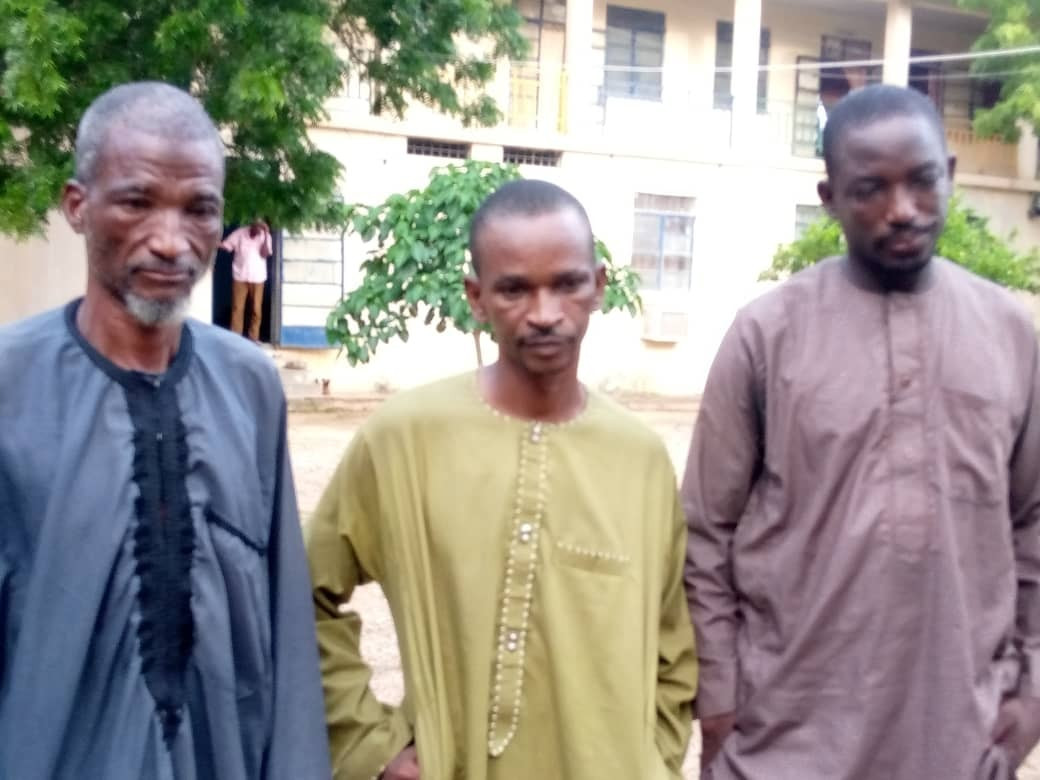 The repentant bandits arrested for armed robbery
Three repentant bandits have been arrested in Katsina state.
Accoridng to the Katsina State Police Command, the trio were arrested for robbery and cattle rustling in Ingawa Local Government Area of the state.
Spokesperson of the command, SP Isah Gambo, who disclosed this in a statement on Wednesday, September 1, said the suspects repented and had been working in collaboration with the Katsina State Government and security agencies.
Gambo said one of the three suspects, Abdullahi Mai-Rafi, was a notorious bandit and was working under the office of Special Assistant to the State Governor on Security since he repented.
"On 25/08/2021 at about 1230hrs, the Command succeeded in arresting the trio of one Abdullahi Mai-Rafi, ‘M’, aged 43yrs of Kofar Marusa Lowcost, Katsina, (2) Abbas Haruna alias Dogo-Abbas, ‘M’, aged 34yrs of Filin Polo Quarters, Katsina and (3) Usman Hassan, ‘M’, alias Manu, aged 50yrs of Ganuwa village, Charanchi LGA of Katsina state, repentant notorious bandits, working in collaboration with the Katsina state government and security agencies," Gambo stated.
"The fact of the matter was that on 11/08/2021 at about 11:00hrs, the trio went to Danmarke forest, Ingawa LGA, with a motor vehicle Toyota, Camry, ash in colour, with registration number DE 631 LED, attacked a herder, one Alhaji Gide Suleiman of Malumafashi LGA while grazing his animals, with machetes and sticks
"They threatened him and his boys that they were from the office of Special Adviser on security to His Excellency, with a false allegation that their brother one Sa’idu had robbed one Lawal of his herds and that they should either produce the said Saidu or bring hundred (100) cows
"After some scuffles, the suspects succeeded in robbing the said Alhaji Gide Suleiman of his twenty (20) cows valued seven million, five hundred and fifty thousand naira (N7,550,000:00K) with the intention of taking them to the said Lawal as compensation for his stolen cows as falsely alleged by them
"They also searched and robbed them of the sum of forty thousand (N40,000:00) naira and four (4) GSM handsets. Subsequently, on 24/08/2021 at about 0730hrs, the same syndicate of Abdullahi Mai-Rafi and three (3) others, attacked the complainant on the same false allegation and attempted to rob him of another set of twenty cows and some sheep, but nemesis caught up with them when they were rounded up and arrested by the Command

"In the course of investigation, suspects confessed to the commission of the offences. The Gang leader Abdullahi Mai-Rafi confessed to have conspired with the others and sold all the cows at Dankama market, Kaita LGA of the state. Two cows and the sum of four hundred and forty-four thousand naira were recovered as exhibits from their possessions. It may interest you to know that Abdullahi Mai-Rafi, was a notorious bandit but repented and was working with the state government under the office of S. A. Security." The statement added
Top Stories