The reptile moved its head close to her face then sank its teeth on her skin before a staff member removed the reptile. 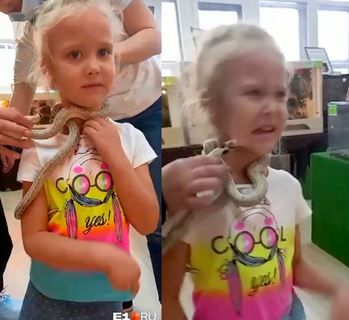 A video has surfaced online showing the horrifying moment a 5-year-old girl was bitten on the face by a snake at a petting zoo.

Viktoria, 5, and her mother visited the Butterfly Park in Yekaterinburg, Russia, when the incident happened.

In a video shared by local media E1.Ru, zoo staff can be seen placing a small white snake around the girl's neck.

The reptile begins moving its head close to her face then sinks its teeth on her skin before a staff member removes the reptile.

The girl was taken to hospital for treatment and was later seen with a plaster on her face.

Snake experts have said it is a non-venomous California King Snake.

The girl's dad Vladimir said: "I went to pick up my wife and children, and they told me my daughter was bitten by a snake.

"We called an ambulance and took the child to hospital to be examined."

He was told by the staff said that the snake "does not attack people at all" and it probably happened because Viktoria had touched the chickens before and that the snake picked up the scent.