The Islami cleric, Gumi made the public call in a statement he issued on Facebook on Monday. 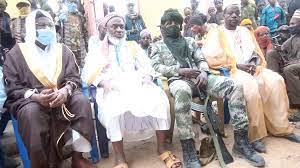 Gumi posing with bandits
Shiekh Ahmad Gumi has kicked against the federal government sending the military to fight bandits.
The controversial cleric warned the FG to stop such immediately.
According to him, the military cannot stop banditry in the country.
Gumi made this public in a statement he issued on Facebook, Monday writing:
“This massive movement of rustled cattle greatly reduced their population. Most of the rustling first affected the rural herdsmen and it became more elaborate in the North-Western region.”
“Herdsmen were left with only one of three options, to join the rustlers or pay tribute to rustlers for protection or lose their cattle. In 2014, the military ‘intervention’ in the Birnin-Gwari Forest to fight cattle rustling changed the headsmen into a resistance movement as many innocent Fulani Ruga settlements were murdered, men, women, and children in hundreds.” Gumi wrote.
Top Stories