The Ebonyi State Police Command has arrested suspected members of the Indigenous People of Biafra. 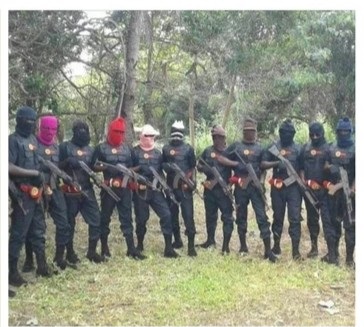 ESN
Some members of the Indigenous People of Biafra IPOB/Eastern Security Network (ESN) have been arrested in Ebonyi state.
They were alleged to have murdered 7 innocent persons in the State.
Briefing newsmen at the Command’s headquarters in Abakaliki, the State Commissioner, CP Aliyu Garba explained that “in the early hours of August 9th 2021, while in forceful enforcement of illegal Sit-At-Home order by the suspects, 7 innocent persons who were going about their lawful businesses along Ohaozara/Onicha expressway by Anike Village were blocked, gruesomely murdered and their vehicles set ablaze.”
He stated that on receipt of the information, operatives of the command immediately swung into action and engaged the hoodlums in a gun battle.
According to him, during the gun duel, two of the suspected IPOB members were fatally wounded while others escaped with bullet wounds.
CP Garba said that 4 amongst the fleeing suspects were later trailed, arrested and now in police custody.
He said that the suspected IPOB members confessed to being members of the organization who participated in the killing of the 7 Persons and burning of 4 vehicles including a truck on the said date.
He said that items recovered from the suspects include 1 General Purpose Machine Gun, GPMG, 10 rounds of Chain Bullets and 5 motorcycles.
CP Garba said that frantic effort is ongoing for the possible arrest of the other fleeing hoodlums adding that the suspects would be arraigned in court soon.
Top Stories