Olajide was murdered in cold blood by gunmen suspected to be kidnappers on Saturday in the Okada area of Edo State. 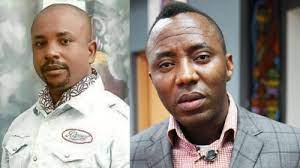 Omoyele Sowore, a Nigerian human rights activist, has said the Edo State Commissioner of Police, Philip Ogbadu, told him the police authorities lack the facility to track the killers of his younger brother, Olajide Sowore.

Olajide was murdered in cold blood by gunmen suspected to be kidnappers on Saturday in the Okada area of Edo State.

Before his death, he was a student of Igbinedion University, Okada, where he was studying Pharmacy.

Speaking at a zoom meeting connecting well-wishers to Olajide’s burial ceremony holding in Ondo State on Thursday, Sowore said Ogbadu told him during a phone conversation that the police authorities know those who carried out the killing but lack the facilities to track them:

“So, they no longer at this particular time have the capacity to track kidnappers, that’s what he told me. He also claimed that as we have always been reported, that these are Fulani people and he is in possession of the picture of one of them. Apparently, one of them is on Facebook and he claimed to have retrieved his picture. I’m just giving you what the police commissioner told me as of yesterday.

“Contrary to the lies you are hearing from all these political people, there is no massive manhunt going on anywhere. In fact, the police could not provide a vehicle for the four policemen they allocated to us to accompany the body. They don’t have any functional vehicle. So which manhunt is happening when you don’t even have the capacity to enter the bush in search of people you claimed killed Olajide Sowore?

“So it’s a story of incompetence everywhere. It’s a story of 'if we are not careful, we may not know who carried this out'. It could be political assassination, of course, it’s an assassination. So we wait and see what will happen from their end.”

Earlier in the week, Sowore thanked everyone for their support and solidarity.

“Thank you all for reaching out with great love and kind words of consolation, support and solidarity over the tragic but still unexplained death of my dearest brother, Felix Olajide Sowore.

“I send you loads of gratitude from the bottom of my heart and that of my entire family.

"We should report to the public that despite the noise from Nigerian govt officials promising to 'apprehend' my brother’s killers, we are not aware of any security agency/ies carrying out rescue operations to free those purportedly abducted or investigating the identity of Jide’s murderers.

"It is not as if we expect anything from the failed system that took our brother’s life, I feel that I owe you all an update on these matters. We will keep the public updated with progress regarding funeral arrangement,” Sowore had said.