An immediate search-and-rescue operation by emergency management workers and residents led to the rescue of two of the trapped victims. 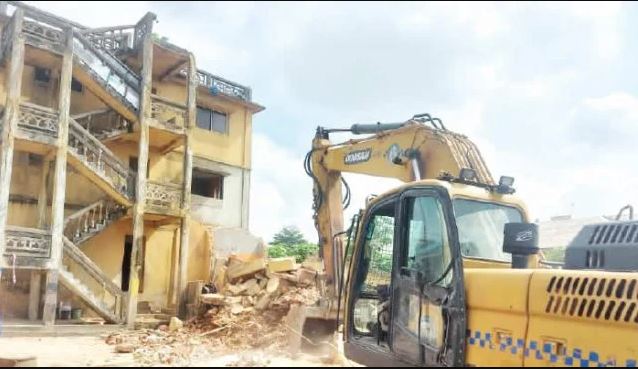 An abandoned two-storey building has been demoloshed by the Lagos State Government after a section of the structure collapsed around Haruna Bus Stop, in the Ikorodu area of the state.

PUNCH Metro gathered that the section collapsed around 10pm on Monday.

While no fewer than 12 occupants of the building were rescued, three were trapped.

An immediate search-and-rescue operation by emergency management workers and residents led to the rescue of two of the trapped victims.

However, the remains of 25-year-old Joseph Ilesanmi were extricated from the rubble on Tuesday.

The rescued victims, some of whom sustained varying degrees of injury, were rushed to the Ikorodu General Hospital for treatment.

Our correspondent gathered that before the incident, officials of the Lagos State Building Control Agency had declared the building unsafe for habitation after it failed an integrity test.

The Acting Zonal Coordinator, National Emergency Management Agency, Ibrahim Farinloye, said occupants of the building, however, continued to live in it despite being cautioned by the owners of the house.

He stated that the collapsed structure was an extension of the main building which failed the integrity test.

Farinloye said, “It was reported that it was an abandoned building and that the owners had asked the occupants to leave, but those people stayed without the consent of the owners.

“Immediately the incident occurred, some residents mobilised themselves to carry out initial rescue activities. Though fire service and police responded, we were unable to do much due to the unavailability of equipment to lift the rubble on the suspected location of the trapped victims.

“The collapsed building was an extension. The emergency phase of the search and rescue has ended with the evacuation of all debris to ground zero with no additional body recovered.

“So far, two people were rescued alive with injuries and one body recovered. The injured victims are currently at the Ikorodu General Hospital receiving medical treatment.”

However, the Lagos State Emergency Management Agency stated that a total of 15 persons were rescued during the operation, which involved officials of the agency, LASBCA, Lagos Fire and Rescue Service, police and other agencies.

The Director-General, LASEMA, Olufemi Oke-Osanyintolu, said a controlled demolition of the building was supervised by officials from the Physical Planning and Urban Development Department, LASBCA and the Lagos State Safety Commission.

He said, “The agency responded to a distress call at 10pm on Monday, October 18, and immediately activated its response plan. A combined team of agency responders, LASBCA and Lagos Fire and Rescue Service managed to safely evacuate a number of occupants and subsequently commenced a rescue operation of the three trapped adults.

“A controlled demolition was planned for this morning (Tuesday). Further to a multi-stakeholder operation at the location, 15 persons were rescued with one fatality, who was trapped in the building.”