The recovery of more bodies, three days after the building collapsed, takes the death toll to 22, with search and rescue operations ongoing. 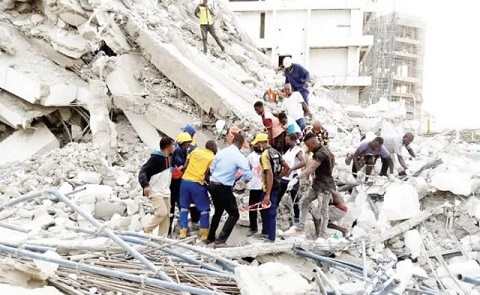 Ikoyi collapsed building
The death toll in the Ikoyi building that collapsed on Monday is now 22.
This comes after emergency workers recovered two more bodies from the rubble of the collapsed building in Ikoyi, Lagos.
The recovery of more bodies, three days after the building collapsed, takes the death toll to 22, with search and rescue operations ongoing.
Nine persons have been rescued so far.
The building – a high-rise under construction located along Gerrard Road in the nation’s commercial hub – collapsed on Monday afternoon.
It remains unclear the total number of people in the building at the time of the collapse. But witnesses say dozens may have been trapped.
Rescue operation so far has accounted for 31 people – nine alive and 22 dead.
On Tuesday, a day after the collapse, Governor Babajide Sanwo-Olu suspended the General Manager of the Lagos State Building Control Agency (LASBCA), Gbolahan Oki, indefinitely.
He also announced that an independent panel will probe and investigate the remote and immediate causes of the incident, as well as make recommendations on how to prevent future collapses.
This is in addition to an internal probe the government is already conducting.
“There will be absolutely no cover-up in the search for truth in this incident. If anyone is found to be indicted, he/she will definitely face the law,” the governor vowed.
“My sincere condolences go to the families who have lost loved ones. May the souls of the departed rest in peace.
“My appreciation (goes) to the first responders and all who have joined the rescue efforts. A help desk has been set up at the site for people seeking information about their relations who may have been involved in the incident.”
Members of the panel to be constituted, according to Governor Sanwo-Olu, will be drawn from the Nigeria Institute of Architects (NIA), Nigerian Institute of Town Planners (NITP), Nigeria Society of Engineers (NSE), and other professional bodies.
Top Stories