One of the victims of the heinous crime is dead while the others can only be said to be existing and not truly living. 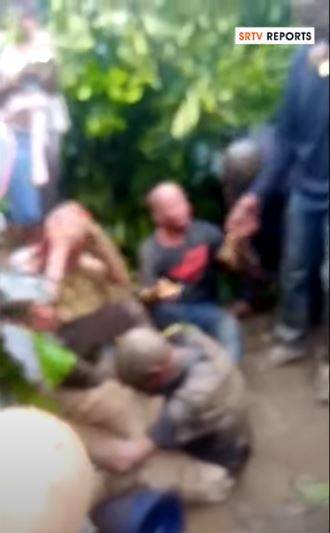 According to a report by SaharaReporters, some people including a family in the Isiala Ngwa Local Government Area of Abia State have suffered a despicable form of treatment that will horrify anyone with any shred of decency or humanity.

One of the victims of the heinous crime is dead while the others can only be said to be existing and not truly living.

Videos obtained by SaharaReporters show how some of the victims were put through some of the worst forms of inhumane treatments, which eventually led to the death of one of them, Njoku. The abuse and brutalisation of the victims were said to have been carried out following allegations that Chiemela Onyenma murdered his brother, Otuosorochi Onyenma.

It was learnt that the others were abused and assaulted along with Chiemela Onyenma because of their association or relationship with him. Some of them shared the heavy dose of assault because they attempted to defend Chiemela Onyenma.

It all started with allegations by villagers that Chiemela Onyenma killed his brother, Otuosorochi, using juju (charms).

He and others, including his wife, were held hostage, then their house was looted and razed.

It was learnt that on Sunday, September 5, 2021, a community member identified as Sunday Njoku had invited Chiemela Onyenma for a meeting at the Ihieorji village hall on Monday, September 13 concerning his family (Onyenma’s).

But when Chiemela Onyenma, in company with his niece, Mkpuruoma Onyenma got to the village hall, it did not look like a meeting venue but a slaughterhouse.

What they met were villagers, including the village head, Monday Dike, with weapons. And not long after, Dike allegedly instigated others to attack Chiemela Onyenma over allegations that he was responsible for his brother’s death.

It was learnt that in the process, Chiemela Onyenma’s niece, Mkpuruoma was also assaulted and brutalised. She was beaten up for trying to prevent an imminent assault on her uncle, Chiemela Onyenma. Her clothes were said to have been torn and her mobile phone taken by the assailants.

A good Samaritan identified as Nze Ogwuma, who had also tried to intervene was said to have been assaulted.

Eventually, some persons were able to sneak Chiemela Onyenma out of the place, leaving Mkpuruoma and Ogwuma to suffer more assault and injuries.

But it did not end there.

The assailants destroyed their properties and from there, the village head, Dike, was said to have initiated their transfer to an uninhabited building in a remote part of the village called Uzoiyi to torture them.

At the makeshift torture chamber, they were beaten, brutalised and assaulted,

One of them, Godwin Njoku later died from injuries sustained during the horrible experience.

One of the videos shows Godwin Njoku crying in pain as the assailants tortured him, by making melted rubber as it was being burnt to drip on his head.

Another video shows a man standing on the back of one of the victims, whose head was placed on a tyre rim like he was being prepared to be slaughtered.

Njoku allegedly died from his injuries the following night, Tuesday, September 28, with his remains reportedly taken in a wheelbarrow and put in a Toyota vehicle driven by one Chizuruoke Nwogu.

Nwogu and some others were said to have taken his corpse to an unknown location, probably for burial in a shallow grave.

Later, Chiemela Onyenma’s son, identified as Obinna went to get his father and stepmother at Osusu, from where they were taken to a private hospital – Ronald Hospital in the same local government area.

It was learnt that policemen from the state Criminal Investigation and Intelligence Department (CIID) had visited the hospital to talk to Chiemela Onyenma and his wife, Best.

Denying that he killed his brother, Chiemela Onyenma said, “When I got to the village hall that day, I met so many people, including chiefs like me with weapons.

“I asked them why they had weapons, they said nothing was wrong and that they had gathered because of my family’s case. They said they learnt that I was the one who killed my brother, Otuosorochi Onyema. I asked them what I used in killing him- was it a knife or a gun? They said I killed him with juju (Nshi). I told them I didn’t kill anybody. If I killed someone, it will be the government that will be judging the case, not in the village hall.

“The chairman suggested that they make inquiry into what killed him. When they came back, they still insisted that I killed him with charms.”

According to him, one of his brothers identified as Iheoma Onyenma had paid some thugs N600,000 and given them a goat to make them carry out the atrocities they did and hold him responsible for his brother’s death.

He, therefore, called on the state government and other relevant authorities to look into the crisis in his community and assist in paying their medical bills.