The driver of the vehicle fled immediately from the scene. This infuriated the residents of the community who set the vehicle ablaze. 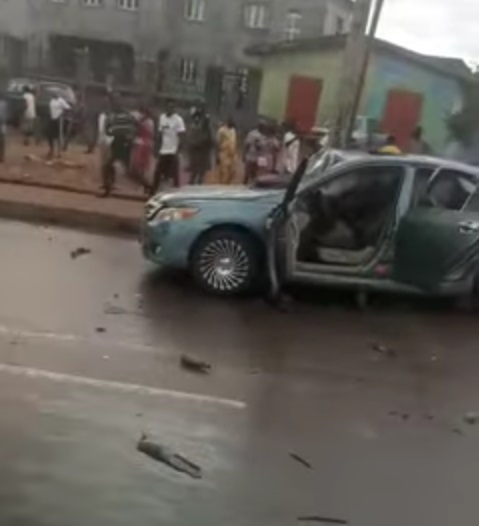 Scene of the incident
A car driven by suspected internet fraudsters has been set ablaze after it killed two persons and left four others injured.
The sad incident happened after the car was involved in a fatal motor accident in Ondo town, headquarters of Ondo West Local Government Area of Ondo state.
It was gathered that the driver of a Toyota Camry, was driving on top speed when he rammed into a tricycle around NEPA, Ademulegun road on Saturday November 6, killing the driver, a passenger and injuring others.
The driver of the vehicle fled immediately from the scene. This infuriated the residents of the community who set the vehicle ablaze.
An eye witness explained that the driver was on top speed during the downpour and lost control of the vehicle before ramming into the tricycle.
"The driver jumped out of the car and ran away after the accident had occured. The escape of the driver infuriated the residents of the area to set the vehicle ablaze." the witness said.
Men of the Federal Road Safety Commission (FRSC) who visited the scene of the accident, rushed the injured to the hospital and deposited the corpses at the morgue.
Confirming the incident on Monday, the spokesperson of the State Police Command, Funmilayo Odunlami, said two people died while four people were injured in the accident which involved a Toyota Camry car and a tricycle.
The PPRO said the command had begun the trail of the fleeing driver while the investigation was ongoing.
"We have begun to look for the driver and we will ensure we apprehend him while we continue with the investigation,” she stated.
Odunlami, however, said the identity of the suspect is still unknown.
"I cannot confirm if the driver of the vehicle is a yahoo boy or not." she added.
Watch video below:
Top Stories