EFCC spokesman, Wilson Uwujaren, stated the development in a statement made available to SaharaReporters on Tuesday. 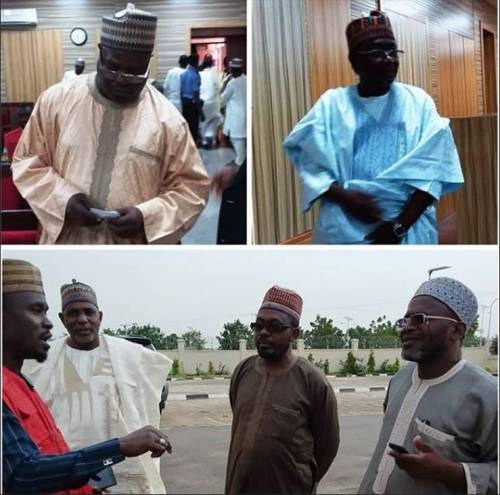 The Economic and Financial Crimes Commission (EFCC), Maiduguri Zonal Command has re-arraigned a former Minister of Science and Technology, Abdu Bulama over fraud charges filed against him.

He was re-arraigned on Monday before Justice Fadima Murtala Aminu of the Federal High Court sitting in Damaturu, Yobe State, on seven counts of criminal conspiracy and money laundering to the tune of N450 million (Four Hundred and Fifty Million Naira).

EFCC spokesman, Wilson Uwujaren, stated the development in a statement made available to SaharaReporters on Tuesday.

According to him, the ex-minister was re-arraigned alongside a former Commissioner for Integrated and Rural Development in Yobe State, Mohammed Kadai, as well as three others namely Abba Gana Tata, Muhammad Mamu and Hassan Ibn Jaks.

Bulama was said to have allegedly received the said sum from Diezani Alison-Madueke, a former Minister of Petroleum Resources, to influence the outcome of the 2015 Presidential election as the Coordinator of former President Goodluck Jonathan’s 2015 Re-election Campaign Committee in Yobe.

Kadai was deputy coordinator, while the other three defendants were members of the committee.

Count one of the charges reads, “That you, Dr Abdu Bulama, Hon. Mohammed Kadai, Abbas Gana Tata, Muhammad Mamu And Hassan Ibn Jaks on or about the 27th day of March 2015 at Damaturu, Yobe State, within the jurisdiction of this Honourable Court, did agree among yourselves to do an illegal act, to wit: conspiracy to commit money laundering and thereby committed an offence contrary to and punishable under Section 18(a) of the Money Laundering (Prohibition) Act 2011 as amended.”

But during their arraignment, the defendants pleaded not guilty to the charges preferred against them by the EFCC.

Upon their pleas, prosecution counsel, Mukhtar Ali Ahmed, asked the court for a trial date and to remand the defendants in a correctional centre pending the determination of the case.

While opposing the bail applications of the defendants, Ali Ahmed prayed the court for an accelerated hearing, ‘‘pursuant to Section 19 of the EFCC Establishment Act 2004.’’

He, however, said the court should exercise its discretion in favour of the defendants, adding that the bail conditions ‘‘should be such that will guarantee their attendance in court regularly to face trial’’.

The judge held that the sureties may be private businessmen or professionals in any field or profession. The sureties must also submit to the Registrar of the Court their Tax Clearance Certificate for the last two years.

The court also held that the defendants shall deposit their passports, official/diplomatic passports or any international documents that they can use to exit the country, with the court.

Aminu thereafter adjourned the matter till January 18, 19 and 20, 2022 for commencement of trial and ordered that the defendants be remanded in Potiskum Correctional Facility pending the fulfilment of their bail conditions.

The defendants were first arraigned on Friday, May 29, 2018, before Justice Hammada Isa Dashen of the Federal High Court, Damaturu.