Ortom congratulated the governorship candidate of the All Progressives Grand Alliance in a statement released through his media aide, Nathaniel Ikyur. 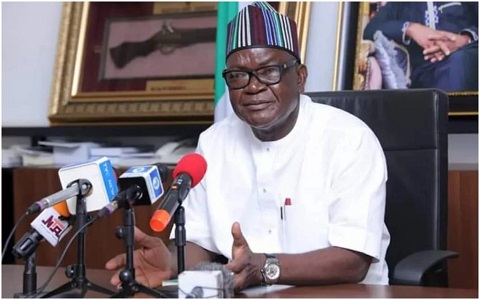 Samuel Ortom
The Governor of Benue State, Samuel Ortom has sent a congratulatory message to Professor Charles Soludo after he was announced as winner of the Anambra State governorship election.
Ortom congratulated the governorship candidate of the All Progressives Grand Alliance in a statement released through his media aide, Nathaniel Ikyur.
The Benue Governor in the statement described the victory of Soludo as a true reflection of the wishes of the people of the state.
The Peoples Democratic Party Governor commended the people of the state for their determination through the electoral process despite the threats and intimidation in the state.
Ortom lauded security operatives in the state for maintaining law and order all through the election days and after the result was declared.
He further stated that the Independent National Electoral Commission deserves commendation for conducting free and fair elections in the state.
According to the Benue State Governor, election in Anambra State is a pointer that democracy will flourish when all agencies and participants involved obeys the dictates of the process guiding the democratic principles.
Ortom prayed that God will help Soludo to serve the people of Anambra State and actualize his vision for the state.
Top Stories