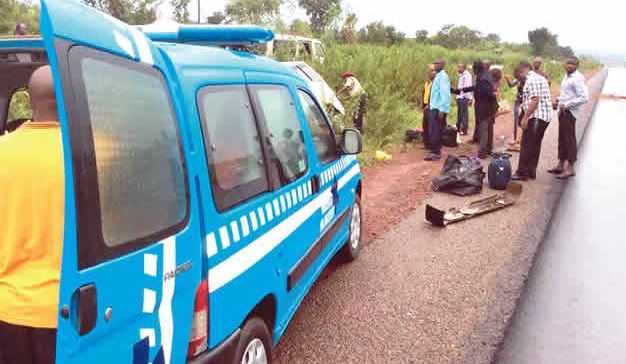 Three persons have been reported dead and others severely injured in a multiple fatal crash along Ilorin-Jebba expressway near Shao junction in Kwara state.

It was gathered that the fatal accident which happened on Thursday evening, November 11, was caused by a speed violation involving two vehicles.

Confirming the incident, Jonathan Owoade, the state sector commander of the Federal Road Safety Corps (FRSC), told Vanguard that seven people including five males and two females were involved in the crash.

He also said that one male and two females died in the crash, adding that four persons sustained varying degrees of fracture injury.

Owoade said that one of the vehicles involved in the accident was a white colour commercial Iveco trailer with the registration number T-0341KT, adding that the driver had no national driver’s licence.

He also went on to state that the second vehicle was a red colour commercial salon Toyota Corolla car with registration number AFN 274 NY, adding that the national driver’s license of the driver was not available.

The FRSC sector commander said that the victims of the crash had been taken to a nearby clinic, while the corpses were deposited at the University of Ilorin Teaching Hospital (UITH) morgue.