About 16 persons are now believed to have lost their lives from the incident which happened on Friday, November 5. 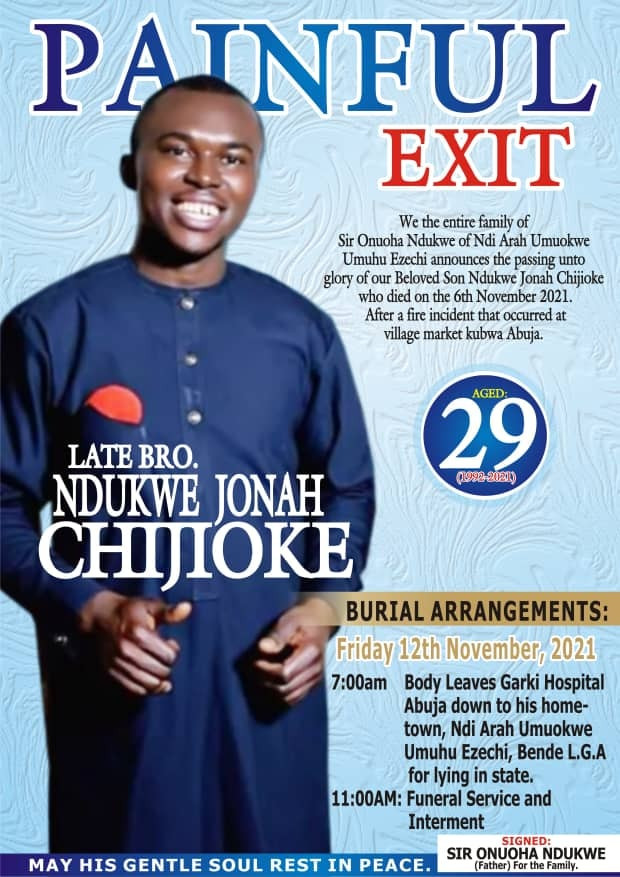 A Nigerian man identified as Ifeanyichukwu Ndukwe gone online to mourn his 29-year-old brother who died in the kerosene tanker explosion which occurred at Kubwa market in Abuja, the Federal Capital Territory.

About 16 persons are now believed to have lost their lives from the incident which happened on Friday, November 5.

The deceased, Jonah Chijioke Ndukwe passed away at Garki Hospital the following day, Saturday 6 and was buried on Friday, November 12.

Taking to Facebook, Ifeanyichukwu narrated the event leading to the painful death of his brother, Jonah.

"I always thought life was a staircase, where you just climb, climb & keep climbing but nay....life is an unending war where we fight daily just to die. Cry me all the oceans of the world, a river definitely won't produce enough tears

On the 5th of Nov. around few minutes past 7 in the evening. I received a notification about an inferno at village market kubwa, Abuja. I started calling to reach out to my own dear brother Jonah to know how distant he is from the explosion ... I called persistently nobody picked up then few minutes later the number became switched off. I called the boss who asked that I rush down to Garki hospital Abuja that they're there

I immediately became even more restless. On arrival I was usherd in to see Jonah my brother. In the ICU

Kai! the injury was severe, bandaged all over the body from head to toe, two hands up & two legs spread apart in bandage, He was in deep pain asking for help.... the tears flowed, so many thoughts running through my head "kèdukwanu Ifè m ka akòrò ñù nwányì library my mother"?

Translation: "ifeanyi, ifeanyi o, ifeanyi my brother. How are you? Have you arrived? You've seen what happened to me, I was packing up in the shop then a fire outbreak happened, it touched me, now you've seen how I am now"

Before the doctors asked that we wait outside as they continue with the treatment( in-between he was asking about his phone)... Little did I know those were to be our very last conversation in this cruel world

On SAT. NOV 6 around 12:00 noon JONAH died in deep pain after trying. The videos & pictures of him in the scene & in the hospital are too loathsome I can't put it out here

As each day comes my disbelief has grown. This perpetual astonishment of grief: Did it really happen? My brother is gone forever? How is it possible?

You discover emotions you cannot name. There is an emotion more hollow than sorrow. There is an acceptance drenched in disbelief. Language fails. Clichés come startlingly alive: the heart is truly heavy, it is no mere metaphor. The mornings so dark you cannot get up from bed, the erratic pulse, the anger, the surprise, the tiny moments of forgetting, the regrets, the doomed attempts at escape. But the pain is waiting.

The pain is inescapable. The desperate longing to turn back time, just to see him again, hear him laugh at my unfunny jokes, even if just to have the chance to say a half goodbye, to say thank you for everything you did for me and everything you were to me

The questions. Why so soon? Why like this? Has the universe not given us our own fair share of pain?

So much laughter and teasing and jokes, the easy companionship, the stories told and retold, the dreams & aspirations, the time spent. Time. Time makes memories. And now that is what is brutally left. The shock. The sense of sinking, of surfaces giving way, of falling through forever

The world feels wrapped in gauze. Everything is hazy and unclear. Seems I need glasses. but glasses for what? is it for fashion or to see clearer if it's a movie script? (but who get mind dey direct this kind life horrow movie dey gimme) or is the glasses meant to cover my teary eyes? Kai!

He tried to continue but couldn't. JONAH DIED IN PAIN. JONAH DIED IN DEEP PAIN. As Mariah Carey rightfully said " in the midst of life we're in death, occasionally as we talk about life their's death hovering around"

As you shout "Jesus " in shock. As you're drenched in utter disbelief. Take these words along:

Life is a mystery. Pain is a difficult angle to travel. Be gentle with life, it is not yours. Nigeria as an institution will fail you(we are not ready to discuss that yet )

Appreciate every breath you take for each one takes you even more closer to death. Pray for my family it's a difficult moment for us. Details of the burial is attached herein, come let's bid farewell to the one that TRIED.

AND TO THE VERY ONE WHO TRIED. NDUKWE JONAH CHIJIOKE nwa nnem. I have spoken to you severely since you left & i know you heard me clearly....JONAH CHIJIOKE NDUKWE If your demise is not from your CHI, I wholeheartedly beg you in tears  (in uniosm with everyone & everything that genuinely wish you well) biko you and your CHI ekwekwala

And may the hard pain you felt before your demise, the cry for assistance, your plea for help & all the many known & unknown lack you experienced here on Earth be the very last in our family. AMEN. Adios to the one that REALLY TRIED. 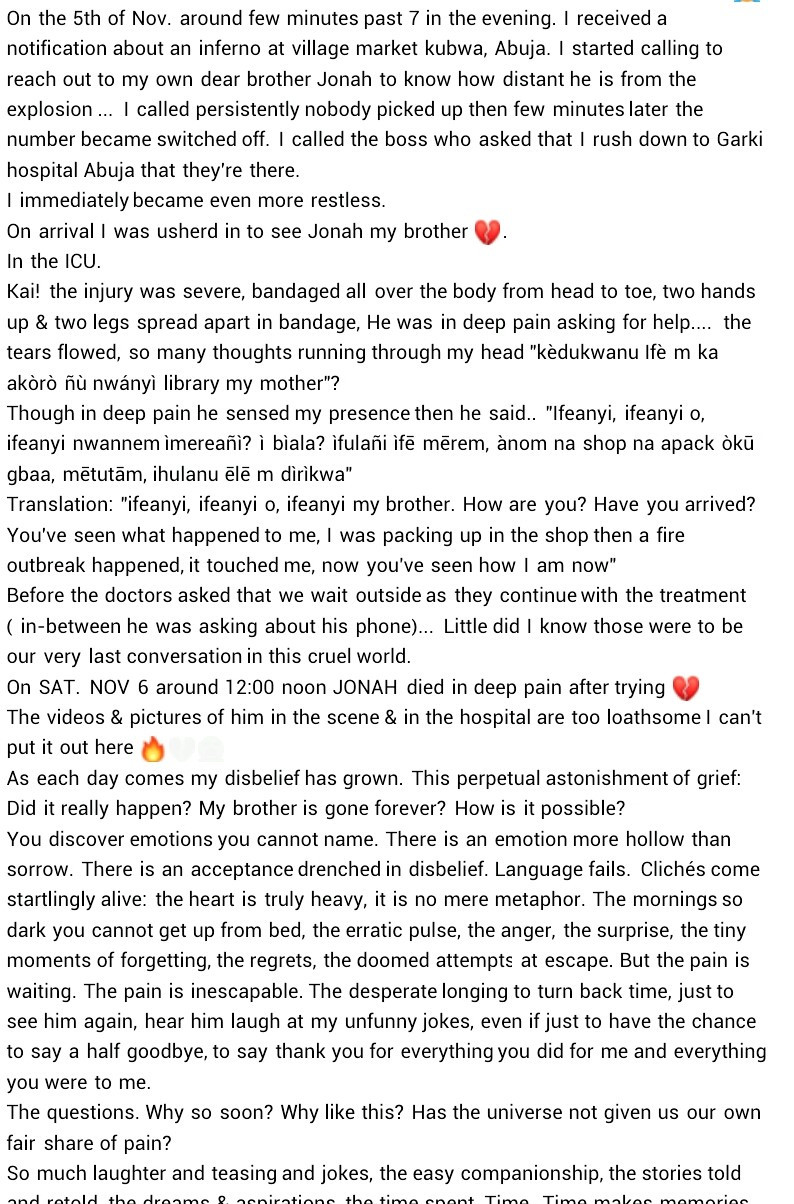