On Tuesday, SaharaReporters reported that some youths took to the streets to protest the killing of the young man identified as Oliver Ezra who was allegedly killed by the policeman. 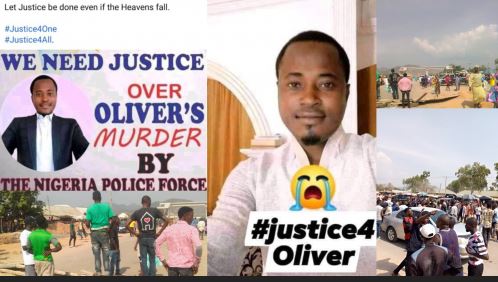 Officers of the Nigeria Police Force has arrested a trigger-happy officer, Sergeant Haruna Idi, who allegedly shot dead a driver over N50 bribe in Taraba State.

On Tuesday, SaharaReporters reported that some youths took to the streets to protest the killing of the young man identified as Oliver Ezra who was allegedly killed by the policeman.

SaharaReporters gathered that Ezra was shot and killed by the yet-to-be-identified police officer for allegedly refusing to pay N50 bribe.

The police however denied the bribery allegation, saying Ezra was hit by accidental discharge, during a struggle with Sergeant Idi at a roadblock along Jalingo/Yola road.

The Spokesperson for the Taraba police command, DSP Usman Abdullahi, said that the deceased, had physically engaged the officer in a fisticuff.

He said, "What actually happened was that the police mounted a roadblock near a major pothole (at Lankavirri) along Jalingo/Yola road, leaving one lane for motorists to maneuver and past.

"Ezra, now late, arrived the checkpoint driving the Chairman of Lau local government Council, (Dr. Daniel Zading). He (Ezra) instructed the police to order a vehicle from the opposite direction to give way for him to pass because he was driving a local government chairman.

"The officer said no. Instead he asked Ezra to give way on first come basis but he refused, instead, he rushed and grabbed the officer, challenging to give him right of the way because he was carrying a VIP (Very Important Personality).

"All this happened while the Chairman and his police orderly were in the car, calling on him to stop struggling with a police officer. This can be corroborated by the orderly.

"While he was struggling with the officer, the officer's finger pulled the trigger, causing accidental discharge, which hit him (Ezra). He was immediately rushed to the hospital on the fateful day being Friday. Unfortunately he died yesterday, being Tuesday.

"It is instructive to note that he (Ezra) was a political thug, which was why he behaved the way he did. Therefore, contrary to speculations, it was an accidental discharge, because if he was shot on purpose as claimed, he would have died on the spot.

"However, Sergeant Haruna Sani has been arrested and detained on the orders of the Commissioner of Police (CP Abimbola), who ordered a discreet investigation into the matter.”