"It Was His Third Trip To Ile-Ife" — Widow Of Slain OAU MBA Student, Bolatito, Opens Up In Emotional Interview 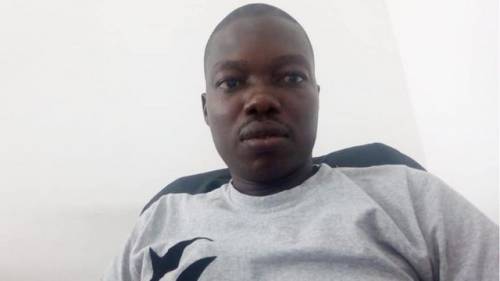 According to a report by SaharaReporters, the wife of the slain Obafemi Awolowo University (OAU), Ile-Ife postgraduate student, Bolatito Adegoke, has lamented that her husband, Timothy Oluwadare Adegoke, was killed like an animal.

"He was only struggling to earn a living and take care of his family," she said.

He was said to have frequented the town to take MBA examinations scheduled at intervals.

He was reported missing since he checked in at the hotel on Friday, November 5. His examinations were scheduled for Saturday, November 6, and Sunday, November 7.

SaharaReporters learned that it was noticed that Oludare was missing when his wife could not reach him on the phone.

Meanwhile, he had earlier contacted his wife to inform her that he was staying in a hotel.

Following a police investigation, money paid by Oludare for lodging was traced to Adesola, who worked in the hotel.

A source told SaharaReporters that the owner of the hotel, who also owns Oduduwa University, Rahman Adegoke Adedoyin, and other workers, initially denied that Oludare was at the hotel.

Meanwhile, the victim's body was discovered after some suspects, including workers at the hotel, were arrested by the police.

“Even animals don’t kill themselves like the way my husband was killed," Bolatito told the British Broadcasting Corporation (BBC) Yoruba in a video.

“This suffering is too much for us. My husband only struggled to be well educated and his life was just cut short like that.

“I cannot say or stop my husband from being educated. He went to Ife to sit for the examination regarding his MBA program at OAU. My husband was struggling to earn a living and feed himself and our family only for him to end up being killed.

“His trip to Ife was the third one. He had been there two times on weekends for his MBA program. He arrived Ile-Ife on November 5, 2021. He called me after he got to Ife, having boarded an airplane from Abuja to Akure.

“He called me when their plane landed in Akure airport before he traveled by road to Ile-Ife. Later, he called me when he got to the hotel at Ile-Ife and said he wanted to rest so that he could read his book ahead of the exam the following day.

“I didn’t call him again so that I do not disturb him during his study time. The following morning, I called his phone number, it wasn’t going through and I kept calling till the next day, I couldn’t get through to him. I was very worried.

“I had to call his brother undergoing his NYSC in Osun State, at Osogbo. Luckily, I got the receipt of his previous lodging in the hotel and took a picture with my phone and immediately sent it to my brother-in-law. He traced the hotel and located it in Ile-Ife.

“The same day, the parents of my husband called to raise an alarm that they too had been calling the phone number of my husband for days without result.

“When my brother-in-law got to the hotel to inquire about my husband, they denied that he lodged there, but through the transaction on his phone, we discovered that he transferred money to another person apart from myself. The person was later discovered to be one of the staff of the hotel, who is a lady.

“The lady was arrested by the police, including five other staffers and they admitted that my husband lodged in Hilton Hotels and Resorts. They later confessed that he was dead and took the police to where his remains were buried. They killed my husband and just buried him. They made him suffer.

“Nowhere is safe in this country again. I want the government to help me with my children so that my husband’s death would not be in vain. How can they just kill him like that? Even animals don’t kill themselves like that. I want justice.

“The owner of the hotel sent an emissary to our lawyer, saying he was ready to pay any amount of money so that the matter can be settled. But, the lawyer refused, insisting that no amount of money can replace the life of my husband, who was gruesomely murdered.

“The government should not allow this matter to be swept under the carpet by ensuring diligent investigation and bringing to justice all the people who conspired to kill my husband.”