The Academic Excellence Prize is an initiative of Engr. Osasere Favour Osifo, a former President of the UNIBEN Students' Union,. 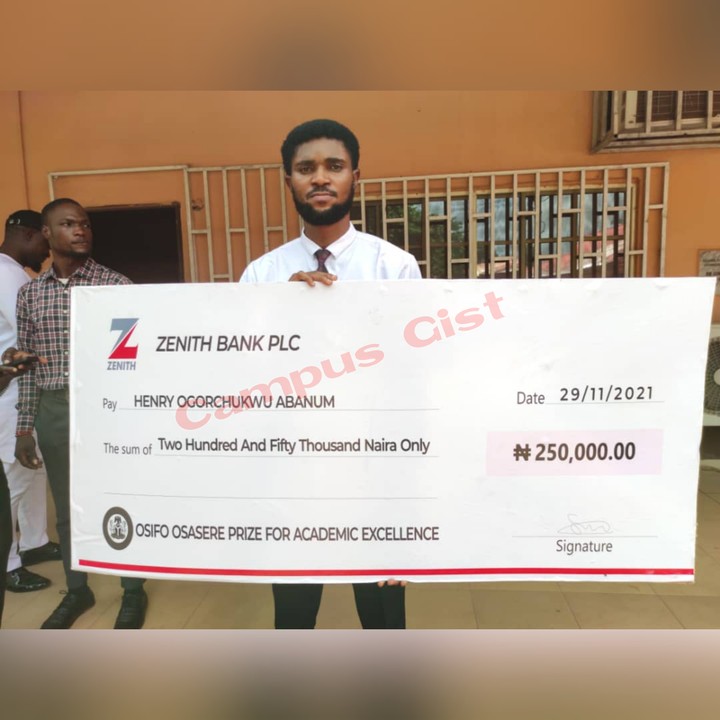 Abunam
Mr. Henry Ogorchukwu Abanum has gotten a reward of N250,000 after he emerged the overall best graduating student of the University of Benin (UNIBEN), according to Campus Gist.
He was given the Osasere Osifo Prize for Academic Excellence award at the just concluded 46th and 47th combined Convocation Ceremonies of the institution.
The Academic Excellence Prize is an initiative of Engr. Osasere Favour Osifo, a former President of the UNIBEN Students' Union, who is currently the Vice-President of the University of Benin Alumni Association North America (UBAANA) chapter, and also a member of the United States (U.S.) Airforce.
The award presentation ceremony took place on Monday at the University of Benin Students' Affairs Division. Mr. Abanum, who graduated with a First Class, 4.97 GPA, from the Faculty of Pharmacy, was honoured with the sum of N250,000 by Engr. Osifo in recognition of his academic excellence.
Speaking at the Award ceremony, Engr. Osifo lamented that celebrating mediocrity and shunning excellence was fast becoming a norm in today's society, hence, the coming on board of the Osasere Osifo Prize for Academic Excellence to change the narrative.
Represented by a former Public Relations Officer of the UNIBEN SUG, Comrade Oguche Divine Omale, Engr. Osifo said the academic feat achieved by Mr. Abanum should be applauded by all lovers of excellence, hard work, and diligence.
In honouring Mr. Abanum, Engr. Osifo said the Osasere Osifo Prize for Academic Excellence hopes to inspire other Nigerian students to make excellence their cardinal objective as they go through the four walls of the university.
He expressed confidence that the award was the beginning of every good thing to come the way of the awardee by graduating top of his class and as overall best in the University of Benin.
Engr. Osifo said Mr. Abanum had proven that quality is never an accident, but the result of intelligent effort, adding that the intelligent effort of Mr. Henry Abanum is what is being rewarded today.
Those present at the Award ceremony held at the Ugbowo Campus of the University of Benin include the institution's Dean of Students' Affairs, Prof. Patrick Igbinaduwa; and the Dean of Faculty of Pharmacy, the awardee's faculty, Prof. Mike Uhumwangho.
Other representatives of Engr. Osifo present at the event includes the Public Relations Officer of the UNIBEN Alumni Association, Comrade Kevin Omokaro Kaka; Comrade Nosakhare Eguagie; NANS Leaders including Comrades Imadeyogie Stephen, Pius Effam Payeke, and CAMPUS GIST publisher, Ogochukwu Isioma.
Top Stories