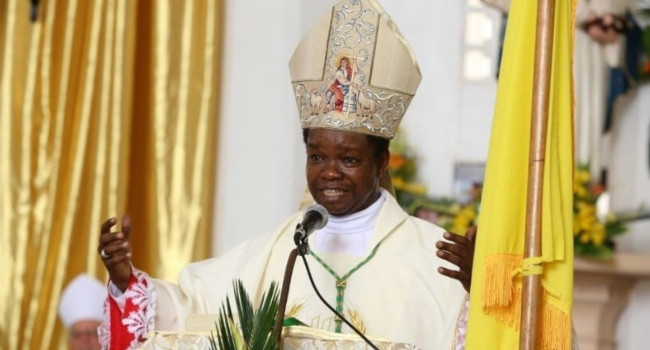 Archbishop Nwachukwu
Nigerian prelate and the Apostolic Nuncio to the Antilles, Archbishop Fortunatus Nwachukwu has gotten a new appointment from Pope Francis.
He has now been appointed as the new Permanent Observer of the Holy See to the United Nations Office and Specialized Institutions in Geneva.
The 61-year-old Nwachukwu who now replaces Bishop Ivan Jurkovic (previously appointed nuncio in Canada), was also appointed as the Permanent Observer to the World Trade Organization (WTO) and the Representative of the Holy See to the International Organization for Migration (IOM).
The Nigerian cleric's appointment was confirmed in a press release from the Office of the Secretariat of the Episcopal Conference of the Antilles dated Friday, December 17, 2021.
It read;
“The Holy Father has appointed Archbishop Fortunatus Nwachukwu, titular of Acquaviva and until now apostolic nuncio in Trinidad and Tobago, Antigua and Barbuda, Bahamas, Barbados, Belize, Dominica, Jamaica, Grenada, the Cooperative Republic of Guyana, Saint Kitts and Nevis, Santa Lucia, Saint Vincent and the Grenadines, and Suriname, and apostolic delegate in the Antilles; and Holy See Plenipotentiary Representative at the Caribbean Community (CARICOM), as Holy See Permanent Observer to the United Nations and Specialised Institutions in Geneva and at the World Trade Organisation (WTO) and Holy See Representative at the International Organisation for Migration (IOM).
“He sincerely appreciates your support during his mission in this region and requests that you accompany him with your prayers and friendship as he prepares to assume the new responsibilities.”
Prior to his recent appointment, Nwachukwu was the Apostolic Nuncio to Saint Lucia, Grenada, and the Bahamas. He got the appointment on 27 February 2018; and was also appointed as Apostolic Nuncio to Suriname on 9 March 2018; and Apostolic Nuncio to Belize on 8 September 2018.
Top Stories