The GPS said in a statement that only Marshals of Parliament are authorized to handle security issues pertaining to the House according to the constitution.

The Ghana Police Force has disclosed why it did not step in while lawmakers exchanged blows on Monday, Dec. 21, during voting on the controversial E-levy bill.

Recall the Members of Parliament got into a physical confrontation during a voting session on e-levy and this triggered many Ghanaians to criticize them.

However after being criticized by Ghanaians for failing to appear in the House and call MPs to order during the brawl, the GPS has stated that such responsibility does not fall within its purview.

The GPS said in a statement that only Marshals of Parliament are authorized to handle security issues pertaining to the House according to the constitution.

“The legal position is that the Police have no authority to enter the Chamber of Parliament to undertake any law enforcement venture. Any such act will be in the contravention of the laws of the country.

“We have however initiated steps to engage the clerk, Marshal, and leadership of Parliament to fashion out a more proactive way of supporting Parliament in this regard within the confines of the laws of the country.” 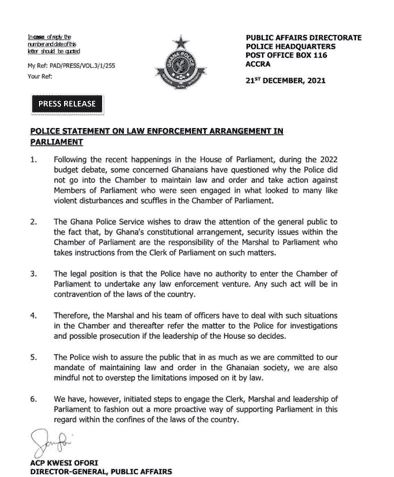