Tension in Bayelsa University Over Sudden Recall Of 3,000 Final-Year Students From Christmas Break


Edoumiekumo had in a circular directed all final-year students and lecturers to return to the university campus and commence their project defence on Wednesday, December 29, 2021. 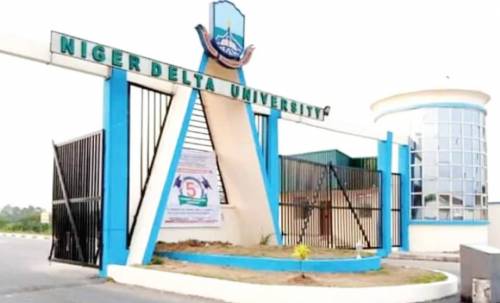 According to a report by SaharaReporters, there is palpable tension in the state-owned university, the Niger Delta University, Ammassoma over the directive by its Vice-Chancellor, Professor Samuel Gowon Edoumiekumo that 3,000 final-year students should cancel their New Year's Day celebration and return to school for their project defence.

Edoumiekumo had in a circular directed all final-year students and lecturers to return to the university campus and commence their project defence on Wednesday, December 29, 2021.

It was gathered that most of the affected final-year students were finding it difficult to comply due to the distance of their houses from the school and lack of financial resources to return to campus during this holiday season as many final-year students reside outside the state.

Already, stakeholders made up of traditional rulers, parents and sponsors of students at the Niger Delta University (NDU) have sent a Save-Our Soul message to the state governor, Senator Douye Diri to intervene and prevail on the Vice-Chancellor to rescind his directive.

The S.O.S letter read, "We call on the state governor to prevail on Professor Samuel Gowon Edoumiekumo to rescind his order and for common sense to prevail over his spontaneous directive that all final-year students and lecturers must return to the university to commence their project defence on Wednesday, 29th December 2021.

"We, as peace-loving stakeholders in the institution, are calling on the Governor to use his good office and the Spirit of Christmas which is celebrated around the world to prevail on Prof. Gowon to immediately withdraw his spontaneous directive and allow the students and lecturers to spend the holiday seasons with their families until early January 2022 when universities across the country will resume.

"The Christmas Spirit and season is a time of love, giving, family unification, and much more which has been celebrated for centuries. People around the world travel to unite and spend time with their family members during the Christmas Holiday Season. Therefore, to spontaneously demand that students and lecturers return to school in the midst of the holiday season to commence their studies is unconscionable and unchristian-like.

"Across the country and globally, schools are closed for the Christmas Season and are expected to resume in early January 2022. It is no secret that Nigerian roads are unsafe during the Christmas season. Many families do not even have the financial resources to transport their children back to school within this holiday season as they have made such plans for January 2022. We are calling on the Governor of Bayelsa State, His Excellency, Senator Douye Diri to urgently come to our aid.”

Attempts to reach the public relations officer of the school, Ingezi Idoni, failed to answer calls to his mobile line or reply to messages sent to his WhatsApp number.

But a senior lecturer of the school who spoke on condition of anonymity argued that the Vice Chancellor's intention was good and in order.