Man Accuses LASTMA Officials Of Brutalising Him, Illegally Confiscating His Vehicle For Months


He alleged that they hit him in the neck, chest, throat, and hands all in a bid to forcibly take the minibus to the LASTMA office in Oshodi. 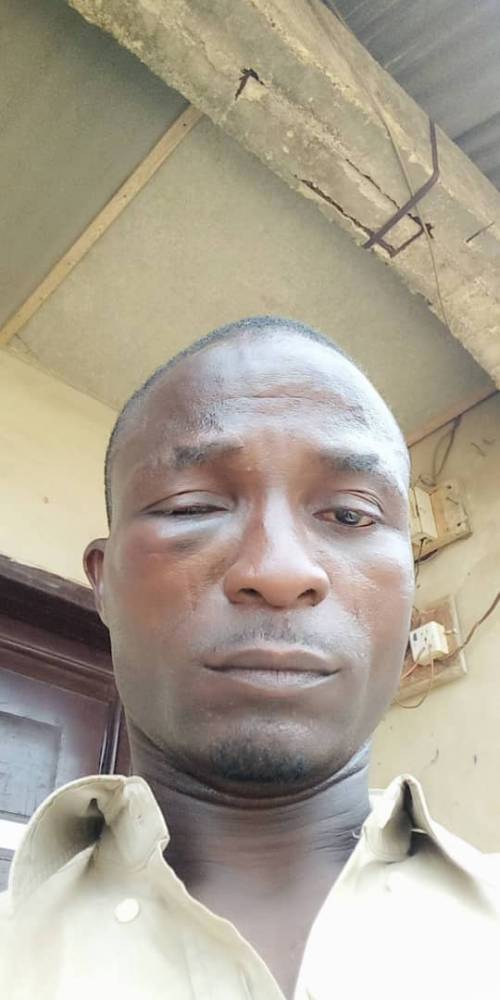 Adejare Olasunkanmi, a Nigerian man, has lamented after officials of the Lagos State Traffic Management Authority (LASTMA) allegedly seized his vehicle and assaulted him.

The man who spoke with SaharaReporters on Thursday explained that on April 12, 2021, he drove in a minibus, given to him by the Lagos Island Local Government under the Local Government empowerment scheme, to Ladipo market, Oshodi and he had barely parked the vehicle when LASTMA officials accosted him.

He noted that the men demanded the key of the minibus and had not listened to any explanation he had to offer before the three of them pounced on him and physically assaulted him.

He alleged that they hit him in the neck, chest, throat and hands all in a bid to forcibly take the minibus to the LASTMA office in Oshodi.

According to him, one of the officials drove the minibus to LASTMA headquarters.

He also said they used the minibus for other illegal operations after which they stole the rim he had gone to purchase and a jack.

He stated that he thereafter wrote petitions to the state governor, Babajide Sanwo-Olu, Commissioner for Transport and the Permanent Secretary, Ministry of Transport, seeking the retrieval of his bus, some of which were acknowledged but actions not taken.

Olasunkanmi said life has been unbearable for him since then as the vehicle that was seized was being used as a means of empowerment for him after he lost his job due to the COVID-19 pandemic.

He said, “My name is Adejare Olasunkanmi, a product of the University of Ado Ekiti I'm 44 years old.

“I drove from Lagos Island to Ladipo market in Mushin to buy (4) 14 size rim & tyre accompanied by a friend but on our way back to Lagos Island Opposite LASTMA headquarters at Oshodi inward Anthony, I parked a minibus popularly called KOROPE with REGISTRATION NO JJJ 955 YA in front of other commercial buses so that my friend could urinate.

“Immediately my friend alighted from the minibus, three (3) thugs in mufti working for LASTMA surfaced & demanded the key of the minibus but they never allowed me to give any explanation before the three of them pounced on me and beat me blue-black; thereafter, one of the thugs drove the minibus to LASTMA Headquarters.

“Subsequently on 15th April 2021, I wrote a Petition to the Permanent Secretary Lagos State Ministry of Transportation & acknowledged on 21st April 2021 seeking for Justice on the circumstances surrounding the forceful confiscation of the minibus without violating any traffic law but no positive response.

“Again on 11th May 2021, I wrote another Petition to the Honourable Commissioner, Lagos State Ministry of Transportation and acknowledged on 11th May 2021 but to no avail. Consequently, on 25th October 2021, I wrote another Petition to His Excellency the Executive Governor of Lagos State Mr Babajide Olushola Sanwo-Olu and acknowledged by the office of the chief of staff Mr Tayo Akinmade Ayinde on 26th October 2021 but till date no response.

"Since 12th April 2021, life has been frustrating and unbearable for me because this minibus in question was given to me and others by Lagos Island Local Government to ameliorate my suffering after I lost my job at Apapa due to the COVID 19 hiatus and also indebted to the tune of One Million, three hundred & twenty thousand naira while the bus is rotting away with everything inside the minibus looted including the four (4) tyres & rim I came to buy at Ladipo market.”

When SaharaReporters got in touch with Mr Olumide Filade, the spokesperson for LASTMA, he said Olasunkanmi should see him in his office next week.