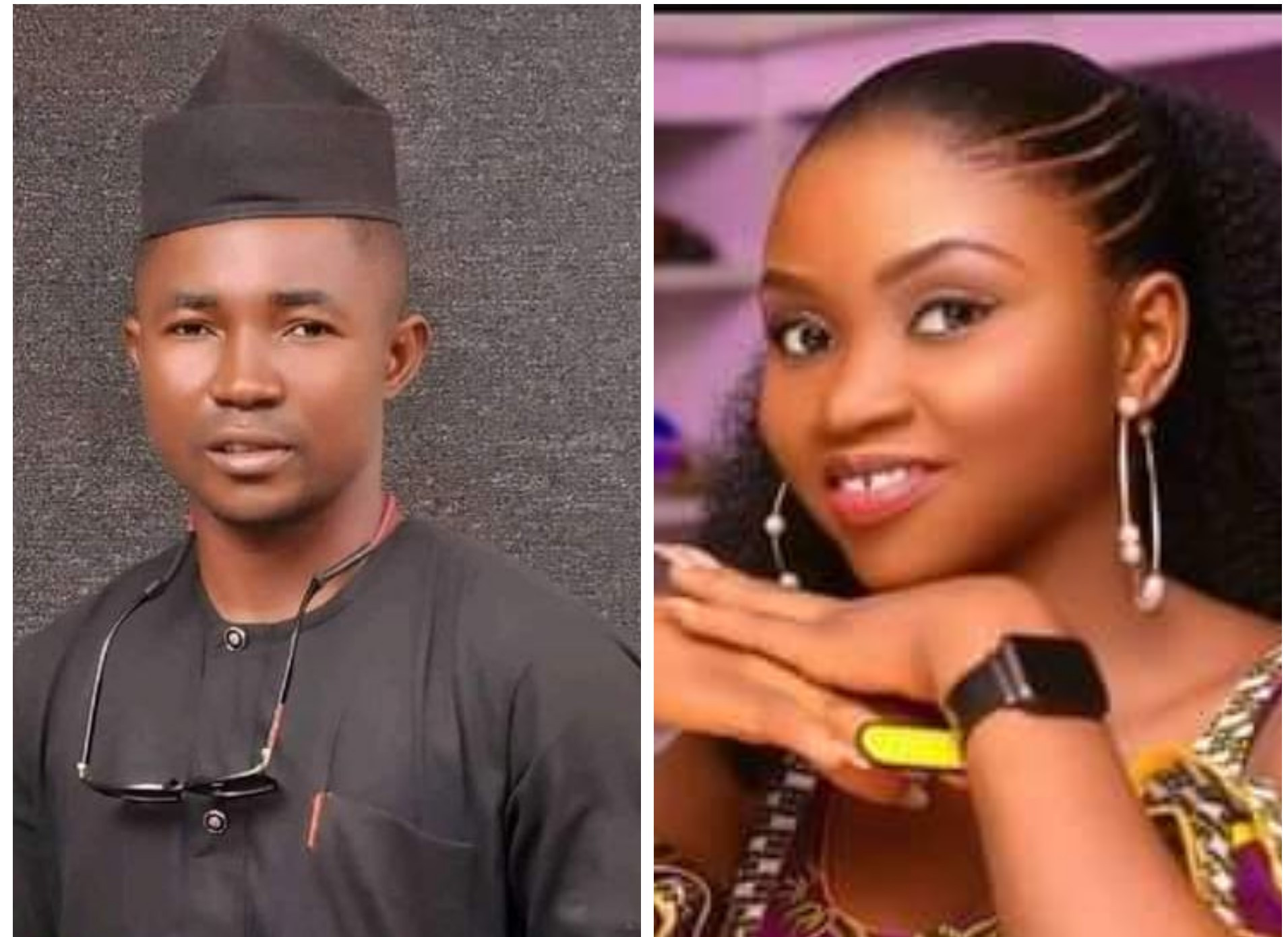 A man identified as Lubem Terkula from Benue State, has publicly apologised to his ex-girlfriend and begged her to give him a second chance.

Taking to Facebook on Friday, January 14, the Benue State University graduate narrated how he met Joyce and what led to their split.

He wrote; "My close friends are the reason for my break up, am missing Orbunde Member Joyce but don't know how to approach her after all. Plssss advice me on how to have her back."

We broke up over a reason so unreasonable, and I have not been able to get over her. She was the best thing that happened to me back then when I was still growing up in this relationship thingy.

"She was as energetic as I was, always pushing me, always criticizing, very objective, beautiful and classy, very friendly at the same time. She gets so moody sometimes and it makes her so adorable and lovable. Yet we still broke up

"I met her after she broke up with her former boyfriend. She was extremely difficult at first, making sure she did not fail in passing the message as to how much she disliked guys. However, there was something about MJ, I really liked, her beauty, the flash of her eyes, the laughter, her deep throated voice, open teeth. I just fell in love with everything

We met, talked for sometime, and then after about three months of getting to know each other, she agreed to go out with me. After service months and into the real world.

We had our issues, yes and we thought we were going to spend the rest of our lives together. 6 months into the relationship, we started getting uncomfortable with each other. She wanted more, I wanted more.

She craved more loving and attention, It got so bad that I was simply carried away and over ambitious that I forgot I had a girlfriend, the way I talk to her sometimes in public also was not welcoming at all and I don't know whether she have found solace in the arms of another boy. Life! We allowed it to degenerate so bad that we broke up exactly five months to the dated we started dating.

Till today, I still ask myself, why did we even break up? It sounded foolish on our part and I couldn’t muster enough courage to ask her why. We had huge dreams and wanted to be better. She was everything I wanted but then, I lubem Terkula messed up!

I am sure I’m not the only one who gets to miss his ex, a lot of guys/ ladies would be experiencing this as well. You will begin to ask yourself: why the break, what went wrong, do I need re-evaluation going forward, do I miss him/her, Am I happy leaving him/her.

Well, considering the fact that all that glitters are not gold, and the need to check if obviously you have outgrown that feeling over the years or the feeling of missing your ex keeps coming back, then we need to ascertain some basic facts and go back to where we truly belong 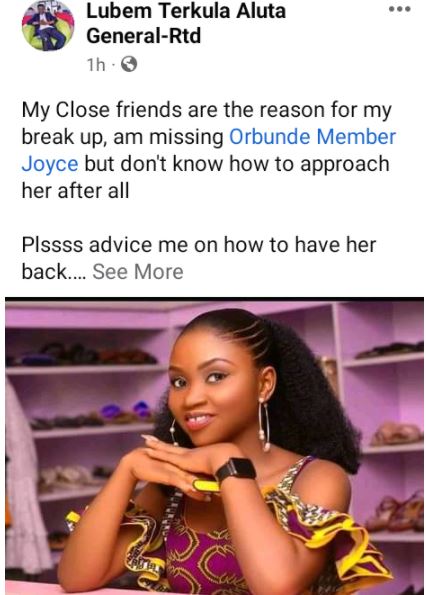 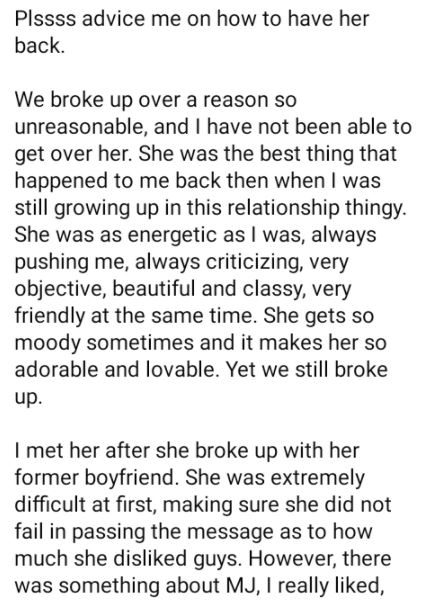 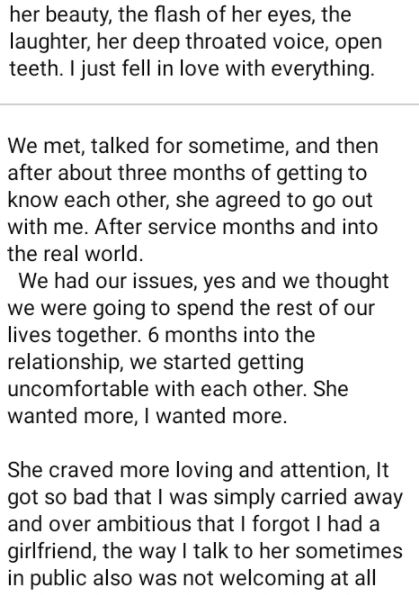 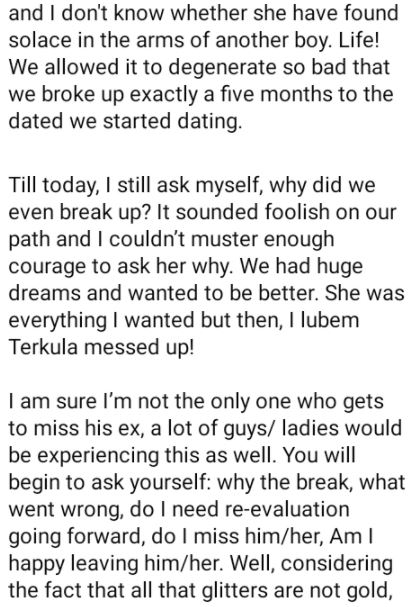 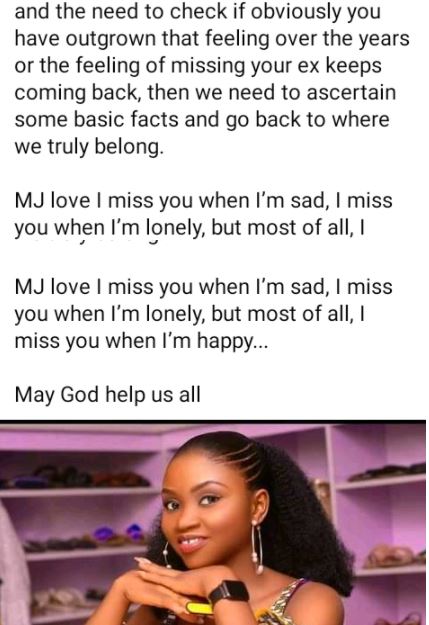 Epic Throwback Photos Of Aliko Dangote With Friends Many Years Ago

NURTW Boss, MC Oluomo Attends His Children's Graduation In The US (Photos)

Eguavoen Steps Down As Super Eagles Coach After AFCON 2021 Exit