Fayose’s Son Warns Him Against Contesting For Presidency In 2023


Funso in his post stated that the damage President Muhammadu Buhari has caused in the country is beyond words and generations to come will bear the brunt. 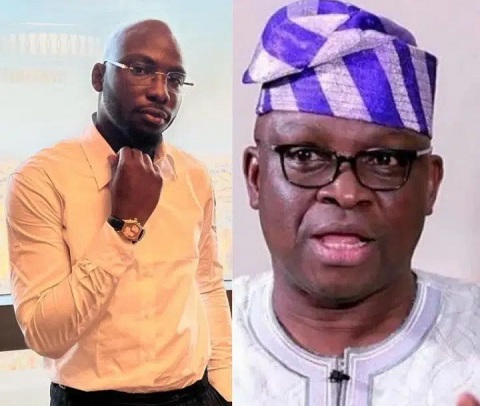 Funso Fayose, son of former Governor of Ekiti State Governor, Ayodele Fayose has warned his father that if he has no plans for Nigeria, he shouldn't contest in the 2023 presidential election.
Funso took to social media to give the advice.
He condemned the government for its failure to tackle insecurity which recently saw terrorists attack an Abuja-Kaduna railway.
According to Funso, the damage President Muhammadu Buhari has caused in the country is beyond words and generations to come will bear the brunt.
He wrote on his Instagram account, “The level at which the country is degrading is becoming decadent and alarming.”
“Violence everywhere, bandits, terrorists are having a free day.
“This is our country and no one is taking it from us. M. Buhari, I understand you are overwhelmed and tired. It’s almost over, the damage you’ve done is beyond words, and generations to come will bear the brunt.
“The last thing you will do is try to field another incompetent candidate. Except you want to finish/destroy what is already being destroyed.”
He questioned the likes of Bola Tinubu, Nyesom Wike, Aminu Tambuwal on what they have to offer Nigerians following the declaration of their ambition.
Funso wrote, “It’s a very important question what does Tinubu, Saraki, Wike and Tambuwal have to offer this country? The nation is almost, if not a failed state. Yet the political desperation is more than the need to fix the nation. You guys have been in power for as long as I can remember, so what’s new?”
The former Governor’s son in a message to his father wrote, “Dear dad if you have intentions of running for President without a road map to get us out of this mess, please don’t sir.” 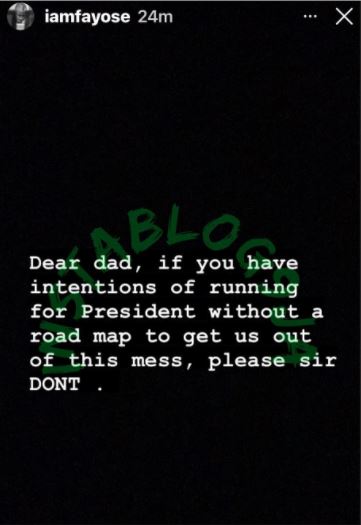