According to witnesses, it took some time to get the man out. But he was dead, when he was retrieved. 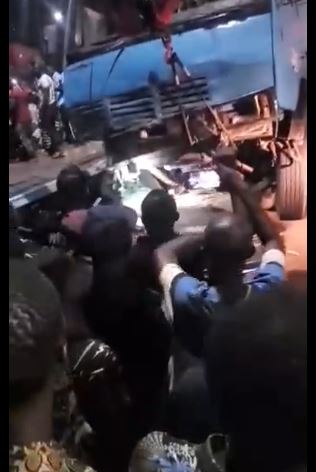 In what will come across as a really heartbreaking development, a middle-aged man, yet to be identified, was crushed to death by a truck that fell off Ojuelegba Bridge in Lagos on Saturday night.

The man was driving a Honda Accord when the truck fell on his car. Rescue agents brought him out of the wreckage, dead.

According to witnesses, it took some time to get the man out. But he was dead, when he was retrieved.

Accidents caused by falling trailers or unlatched containers are common in Ojuelegba.

No fewer than four of such incidents have been recorded in the past 12 months, because the bridge lacked side rails.

Several commenters on Twitter criticised the Lagos State Government for not taking steps to stop the avoidable accidents.

“Every single year, containers always fall at Ojuelegba and no sensible person in government has thought to use their head. Bunch of fools across board”, wrote “the stoned Immaculate”.

“How is it this hard for Lagos state Government to stop these Ojuelegba accidents? Stop the fucking trailers from using the bridge”, said @Collins_Okpe.

LagosTrafficreports suggested: “I think it’s time to stop Containers&Lorries from using Ojuelegba bridge. Lagos State govt must not witness another casualty again. A barricade will do”.