The president’s position was disclosed by the National Security Adviser, Babagana Monguno, who briefed State House correspondents at the end of the meeting. 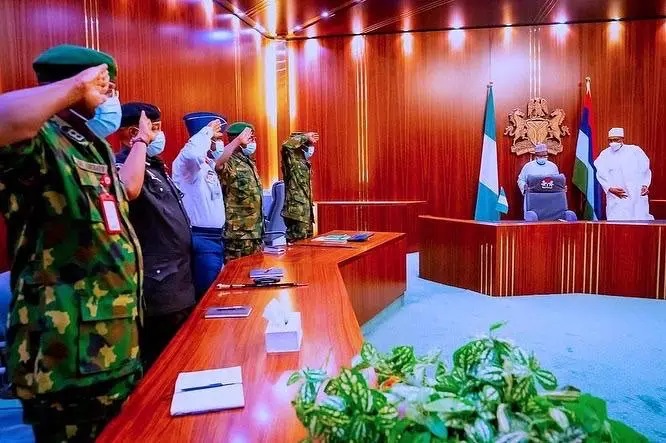 Nigeria's President Muhammadu Buhari has given a new order to all the security chiefs in the country.
This comes after he met them in Abuja on Thursday.
Buhari directed security agencies to immediately rescue all the people kidnapped by armed persons across Nigeria.
The president’s position was disclosed by the National Security Adviser, Babagana Monguno, who briefed State House correspondents at the end of the meeting.
“The President spoke about his sadness in respect of recent security challenges and developments we have had in the country, in particular the incident in which several Nigerians lost their lives with many more taken into captivity by criminals and bandits,” Mr Monguno said.
“Not just those that were captured during the last Kaduna –bound train incident but those that have been in captivity in other parts of the country.
“The President has directed all the operational and intelligence elements to rescue all of these innocent people immediately and unhurt. This is the basis on which other issues were discussed.
“The Chief of Defence Staff, the Service Chiefs and the Inspector General of Police all briefed the president on occurrences in their respective organizations,” the retired major-general said.
On Thursday, Mr Monguno said he made some recommendations on how to tackle the security challenges confronting Nigeria. He said the president is reviewing the recommendations.
“I submitted a memo to Council and my recommendations are being looked into by the president. My recommendations are wide-ranging and they touch on all aspects of security, starting with the level of security of our land borders as well as within the country itself,” he said.
Mr Monguno said decisive steps are being taken to secure all the land borders of the country, in order to address the threats coming from outside such borders.
He said the threats have now shifted from the North-eastern part of the country to the North-west and the North-central but even that must be contained.
“It has to be contained collectively by both the armed forces and constabulary forces but the intelligence agencies have also been directed to enhance the acquisition of intelligence,” he added.
He noted that the present situation in the country calls for collective efforts by all, not only those that have been charged with the responsibility of physically securing the country.
“Unless the wider society, right down to the local governments are willing to give the type of information needed in order to block the activities of these criminals, this situation will continue to linger beyond whatever time frame we are looking at towards ending this problem.”
Top Stories