The former President had last month asked his supporters to “watch out” following calls for him to contest. 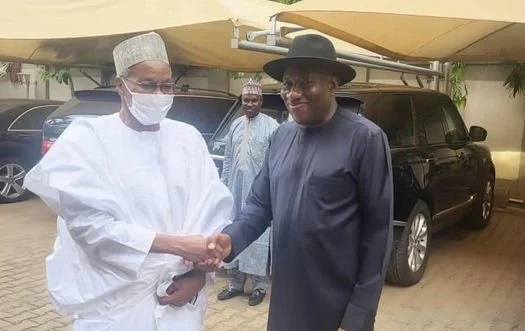 Former President Goodluck Jonathan has paid a visit to Mamman Daura, the influential nephew of the President Muhammadu Buhari, according to Punch.
The meeting took place yesterday amid reports that he will be facing the presidential screening of the All Progressives Congress this week.
In a photo posted by Sahara Reporters, Jonathan is seen shaking hands with Daura.
The former President had last month asked his supporters to “watch out” following calls for him to contest.
A group of Fulani and Almajiri communities also claimed to have sold their cows in order to purchase the N100m form of the APC.
In a chat with The PUNCH, the group said Jonathan would turn up for the screening of presidential aspirants in Abuja.
This is even as the group confirmed that the presidency has started reaching out to aspirants to converge for a meeting on talks that borders on his anointed aspirant.
When news of his APC nomination forms went viral, Jonathan had distanced himself from the group, describing it as an insult.
He was, however, spotted with the National Chairman of the party, Senator Abdullahi Adamu, on the same night that he denied showing interest in the forms.
His renewed romance with the APC has got many Nigerians pondering if he is the possible joker the party was counting on as a consensus candidate.
Speaking with our correspondent, Secretary of the Fulani Group, Usman Mohammed, confirmed that Jonathan’s form had been submitted.
The National Secretary of the APC, Suleiman Argungu, had also confirmed that Jonathan would be screened.
Mohammed said, “Haven’t you heard that we are going to be part of the aspirants for the screening?
“Did I not tell you two weeks ago that despite the submission deadline, the leadership of the party cannot turn down Jonathan’s forms? Quote me anywhere that from now to Thursday, you will be informed about talks surrounding the APC consensus candidate.”
Asked how the group successfully convinced both Jonathan and the APC national working committee into reaching a compromise, Mohammed declined comment, saying it is not what he can divulge to the media.
Top Stories